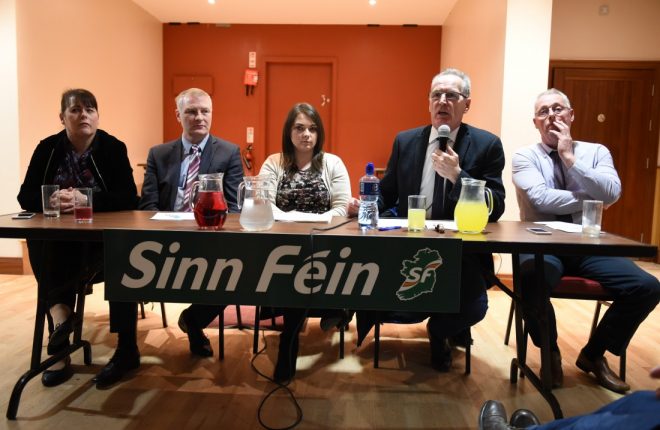 THE GAA in Donagh has denied that a meeting organised by Sinn Fein at St Patrick’s GFC Clubhouse broke the association’s rules that make it clear that the GAA cannot involve itself in any way in party politics.

Newly-elected MLA Jemma Dolan chaired the public meeting in Donagh on Tuesday night. Sinn Fein MLAs Sean Lynch, Michelle Gildernew, Gerry Kelly, and Sinn Fein TD Martin Kenny. The meeting was followed by a candle-lit vigil for Martin McGuinness, who passed away in the early hours of that morning.

Advertisement
It is against the GAA rules for the sporting association to involve itself in party politics. Article 1.11 of the offical GAA guidelines states: “The Association shall be non-party political.
“Party political questions shall not be discussed at its meetings, and no committee, cub, council or representative thereof shall take part, as such, in any party political movement. A penalty of up to twenty four weeks suspension may be imposed for infringements.”
However, Sean Maguire, chairman of St Patrick’s GFC Donagh, said the event had “absolutely not” been a party political meeting.
“It wasn’t a Sinn Fein meeting,” said Mr Maguire. “It was a public meeting, open to all sections of the community, which took the form of a questions and answers on the current state of affairs.”
He added: “From a club’s point of view, we used it [the meeting] to gain any information for grants that might be available for future club development from the sports council.”
However a poster advertising the event on social media clearly shows a Sinn Fein logo and the picture used shows the four speakers at the public meeting, all of whom are members of Sinn Fein.
When asked about the issue by the Herald, Sinn Fein’s Sean Lynch, who was on the panel at the meeting, said: “It’s a public space. If the committee want to lease it out to anyone, that’s up to them.”
The UUP’s Tom Elliott said it was “unfortunate” the club had been linked to a political meeting.
“As I understand, they say they’re not supposed to get involved in party political aspects of things,” said Mr Elliott.
“Their constitution does say, in the wider all-Ireland debate, they are very much nationalist. That’s OK, but by and large with party political issues they’re not supposed to facilitate that.”
Stating the GAA had “involved themselve” in previous Sinn Fein events commemorating “people who were terrorists in the past,” Mr Elliott added: “It always begs the question around where is the line with the GAA and their political work?
“Some people deny this, but their consitution broadly indicated they do have wider nationalist political connotations, but in party political terms they shouldn’t be involved. It’s unfortunate they’ve allowed themselves to become embrolied in that, but whether they were active facilititators or not, I don’t know.