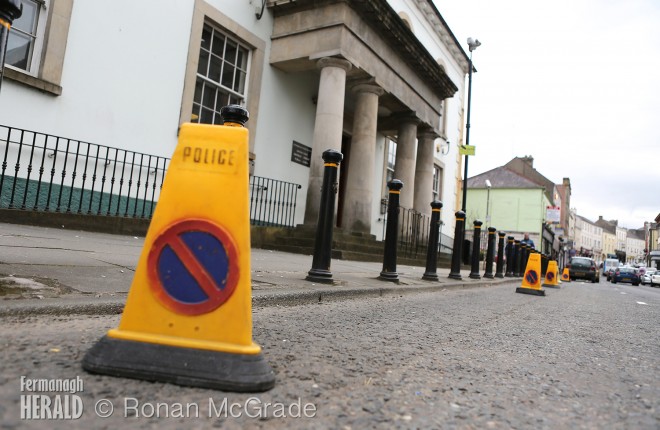 A 23-year-old woman, who assaulted two social workers in a car, has escaped returning to prison.
Julie-Anne Fenton of Woodview Crescent in Trillick appeared at Enniskillen Magistrates Court on Monday in relation to the incident on July 29th last.
The prosecutor outlined that on the date in question, a male and female social worker had been transporting Fenton, who has mental health issues, from Enniskillen to Derry. On the journey, Fenton became agitated and slapped the female in the head before pulling her hair. She then punched the man in the arm before running out of the car in the direction of public toilets where she caused £250 of damage to a soap dispenser and wooden door, belonging to Fermanagh and Omagh District Council.
Fenton was charged with two counts of assault and criminal damage but the court heard that a police interview had to be suspended as she continuously coughed and laughed throughout.
Defence solicitor Michael Fahy pointed out that his client had previously spent time at Hydebank Prison for other offences but stated that this was not the correct place for his client who requires specialist care to deal with her needs that is unavailable in this jurisdiction.
“She falls between two stools,” he said. Mr Fahy added that he had no doubt the experience was “very frightening” for the two injured parties, adding that it could have been much worse had there been a collision or more serious consequences.
Mr Fahy said that previous care packages had been withdrawn from Fenton due to the risk of violent behaviour towards staff. He added that social workers were willing to engage with the defendant again provided there was no further violence inflicted by Fenton.
Addressing Fenton, Deputy District Judge John Rea said: “This assault was inflicted on two social workers who were trying to help you but you repaid that generosity by assaulting them. It was lucky that no-one was seriously injured or that no accident occurred.”
The judge imposed a three month prison sentence, suspended for two years. Fenton was also ordered to pay £50 compensation to the council in lieu of the damage to the toilet.