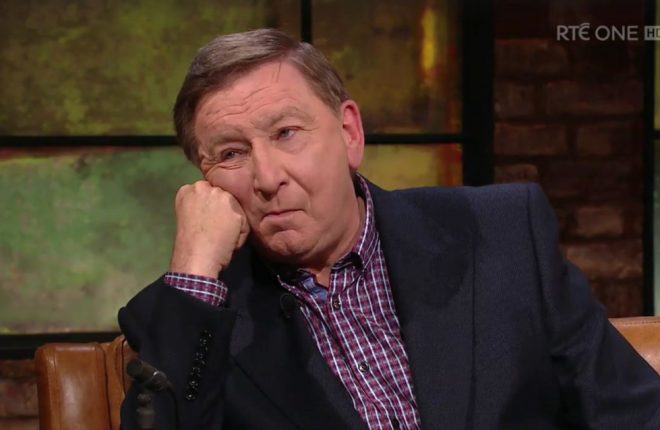 IN A popular TV chat show watched by millions across Ireland, Fr Brian D’Arcy (71) has said that he would rather not be leaving his native Fermanagh. Last year he confirmed that he is to take up a new post although he does not know where.
The author, columnist and broadcaster was speaking on RTE’s The Late Late Show on Friday night. He is preparing to leave St Gabriel’s Retreat at The Graan where he lives with three other priests, later this year. It was announced last August that he would be moving on to pastures new when his position as Superior will be taken over by Fr Charles Cross.
Speaking to host Ryan Tubridy about the upheaval of having to move again at almost 72 years of age, he said: “I would rather stay (in Enniskillen) and I think that the people would rather I stayed too but I accept it fully. I always believe that whatever God wants for you, try and do it and if it happens that I go back to The Graan again, I’ll gladly do it.”
Fr Brian, who has been stationed in his beloved Enniskillen five times during his career, also revealed in the interview that he hopes to one day be laid to rest in his home county.
“I’d love to be buried there (at The Graan) when that eventually happens because it’s my native area.”
When asked if, in a parallel universe, he would love now at his stage to be talking about going to his grandchild’s sixth birthday, Fr Brian replied: “There’s nothing I’d like more. Every choice that one makes in life rules out another series of choices.
“Nobody put a gun to my head and said I must be a priest and in fact everyone said to me that I shouldn’t be a priest. I chose to be a priest but as I have said many times before I would have been a far better one had I married. It would have been lovely.
“I’ve seen terrific friends who are in the Presbyterian and Church of Ireland ministry with their wives and families and I say ‘why the hell can’t we cop ourselves on and do the same?’”
He also admitted that most nights he feels like he has “wasted” his life, adding: “I’m happy enough to do that as long as I wasted it in a good cause.”