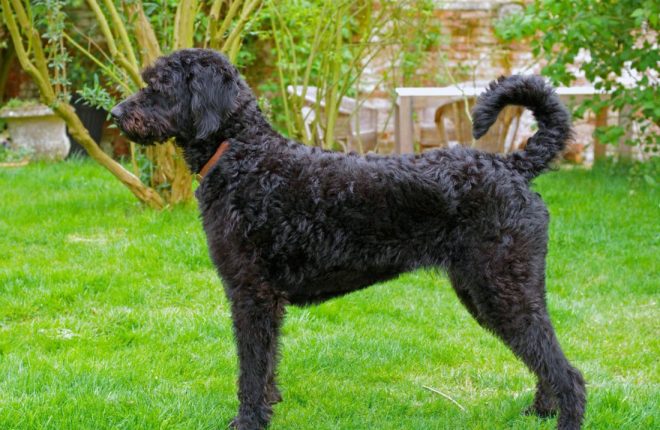 It is believed that a dog similar to this was responsible for the attack in which five pedigree sheep were killed.

FIVE pedigree lambs in Florencecourt have been the victim of a vicious dog attack.
The attack occurred on Monday morning around 7.30am when a dog described as a charcoal grey labradoodle, entered owner Lee York’s land and attacked the lambs.
One of the lambs was brutally killed, while the other four suffered serious injuries. The dog or the owner has not been identified yet.
“The dog is described as charcoal grey, similar to a labradoodle and was quite a large dog. My wife took the sheep to the vet and the injured lambs have been stitched up, but they suffered pretty graphic wounds as their flesh was torn in the attack. It could take seven days for the lambs to get over the attack, as they could be in shock for up to seven days.” said Lee.
The Florencecourt man keeps a small number of sheep, and has previously brought his pedigree flock to the Balmoral Show. As the lambing season is quickly approaching, Lee is worried that further serious harm may be done if the dog is not caught.
“It is very disappointing, once grown up those lambs could be worth up to £1,500. We have not heard of any attacks happening locally but we are worried that unless the dog is caught, this will continue to happen as the dog will think it is fun. I just want to make other farmers aware that there is a risk in the area, as they will be lambing at this time of year,” concluded Lee.