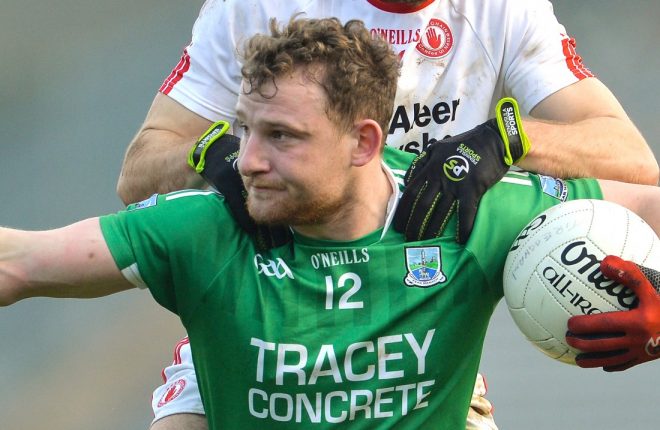 Fermanagh go into their NFL division two campaign with a decent McKenna Cup behind them. One of the most encouraging aspects was the spread of scorers, 16 in all getting their name on the score sheet, an area where they county has struggled in the past.

The opener is against a Down side rebuilding after a horrific 2016. The Mourne men also had a productive McKenna Cup, but there remain some flies in the ointment for Eamonn Burns.
If we consider Down only managed eight different scorers and new attacking star Alan Davidson accounted for fully 54 percent of their McKenna cup haul, then Fermanagh are within in their rights to fancy edging the battle up front.
Fermanagh also carry the confidence of beating Down on their home patch last year into Saturday’s trip to Páirc Esler. Erne boss Pete McGrath doesn’t deny that Fermanagh supporters can head to Newry with a certain spring in their step.
“It’s a game we have to look at very positively and confidently,” said the Erne manager. “Down went through a bad year last year. This is the start of the real season and they’re starting with a home match against us.
“The local press here [in Down] has emphasised the significance of this game to Down in terms of their confidence.
“If they can get a win against Fermanagh to break that losing league sequence they went through last year it would be important for them going forward.
“I have relayed to our players that we can expect a pretty hot reception on Saturday night. The Down fans will be doing whatever they can to drive the team forward. So we’re under no illusions about the task that faces us.
“Having said all that we have a become an experienced, battle-hardened team over this last number of years.
“We’ve gone to places like the Athletic Grounds last year where we were very unlucky to lose by a point, the year previously we drew there. The Athletic Grounds, like Páirc Esler, can be a difficult place to get positive results from.
“We have prepared well. We had a good McKenna Cup and if we bring our best game to Newry on Saturday there’s no reason at all why we can’t win the game.”
Fermanagh have been tipped in some quarters for promotion, but the bookie’s odds of 14/1 put them more in relegation territory than division one contention. McGrath acknowledges the thin line between glory and misery, and the contingent importance of making every game count in an intensely competitive second tier.
“All the teams in the division are capable of beating each other on any given day. There’s no stand out team as there was last year with Tyrone. Last year it was a given they were going to get promoted.
“This year you look at the eight teams in the division and you can make a strong case for any one of them getting promoted,” said McGrath.
“Saturday’s is one game out of seven. It is important we get off to a good start and we will do that if we bring all the things that we are good at to the occasion.
“The ambition, target and aim is to win every game. Promotion is our objective and you’d like to think that by the time three or four games have been played that promotion will still be a realistic objective. But in a league of seven matches every game is significant. Look at Cavan last year. They lost their first two matches and still got promoted. You can drop points and still get promoted, but you can’t go into any game with your guard down thinking if you lose it, it isn’t the end of the world.”
Complicating Fermanagh’s promotion prospects is a programme which sees them play three home games and four away. The Ernesiders began 2017 with two comfortable wins in Brewster Park, extending a long running trend of near invincibility at the Enniskillen venue. However, both away games resulted in defeat and that is a concern with trips to Cork, Kildare and Meath in prospect.
“One thing you can’t allow to happen is to allow away games to become somehow different from the homes matches in terms of mindset in which you approach them,” said McGrath. “Take for example the two matches which follow the Galway game. Away to Cork which is a long trip overnight and away to Kildare, another long trip overnight. People might see those as difficult circumstances. I see those as positive circumstances.
“In my experience the overnight away game where you’ve got the team together from Saturday afternoon, evening and Sunday morning you can do a lot of good work in terms of talking to them and it’s a good bonding exercise.
“On the other hand we have a tremendous record in Brewster Park over this past two or three years. If we can sustain that and win our three home matches there’s six points on the board right away, and collect a number of points away then you’d be in a very good place. But you can only take it one game at a time.”
The McKenna Cup saw new and returning faces like Cian McManus, Lee Cullen, Eddie Courtney and Paddy Reihill making a case for starting place and with practically a full hand to pick from for Newry Fermanagh are in a good place, personnel-wise.
The only major injury issues are Ruairí Corrigan, still out for the foreseeable and Ryan Jones, who is a slight possibility for a return against Galway game and strong possibility for Cork game after the break.