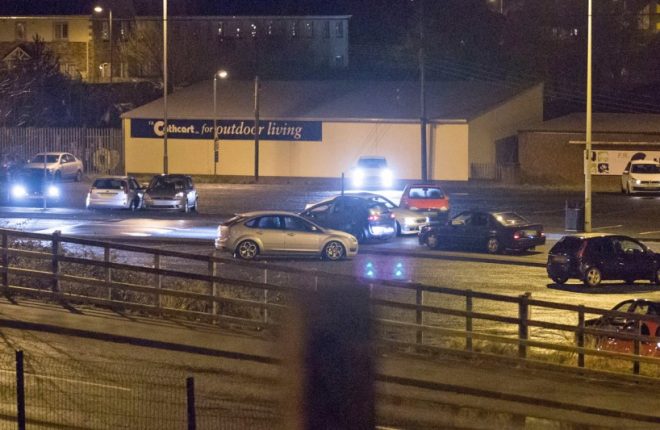 The Hollyhill car park in Enniskillen.

A BELLEEK man has been sentenced to prison and disqualified from driving for five years after an incident in which a police officer was flung from his car.
David Knox (22) from the Lough Shore Road pleaded guilty to dangerous driving, criminal damage, using a vehicle in a dangerous condition, failing to remain at the scene of an accident, failing to report an accident, and resisting police.
On the evening of April 30 last year police received a 999 call from a member of the public regarding a suspected drink driver passing Dunnes Stores in Enniskillen, and stated which direction the car was heading.
An officer on a police motorbike responded to this call, and found a car matching the description and at the Hollyhill car park. Because the car was pulled in with the driver’s door by a wall, the officer approached the car from the passengers’ side.
The officer looked inside the officer saw Knox covered in vomit, and there was vomit on the gear stick and car console also. He knocked on the window, but Knox appeared to stare straight into thin air and did not respond.
When the officer opened the door and leaned into the car, Knox started to move the car slowly forward and the officer had to move with it. He shouted at Knox to stop twice. The defendant then reversed sharply and swung the car around, throwing the officer backwards.
He hit his head and was dragged along by the car door. The court heard the officer needed to take months off work and needed physiotherapy to recover from his injuries afterwards.
Following this, Knox drove off. A police car was approaching at the junction of Dunnes and Curry’s shop nearby, and had to take evasive action by pulling into the entrance to Curry’s to avoid Knox’s car.
All police in the area were alerted to the incident, and Knox’s car was next seen by police driving on the A4 road in the direction of Lisnaskea. He was swerving over the road, but was driving slowly and there was a large queue of traffic behind him.
Knox then pulled into Maguiresbridge, still swerving from side to side, and pulled onto a slip road. He drove for another while before doing a u-turn and heading back towards Maguiresbridge.
They finally apprehended him at the traffic lights at Poundstretchers in Enniskillen, opening his car doors and restraining him by the arms. He resisted arrest.
Knox returned an evidential breath test of zero, but when searched “synthetic substances” were found on his person.
Defence barrister Ciaran Roddy said Knox, who had a number of previous convictions from around the same time, had been abusing so called “legal highs” at that time.
Mr Roddy said Knox was “a troubled young man”, however Deputy District Judge Phillip Mateer disagreed, stating he was “a troublesome” young men. He sentenced Knox to a total of five months in prison and disqualified him from driving for five years.