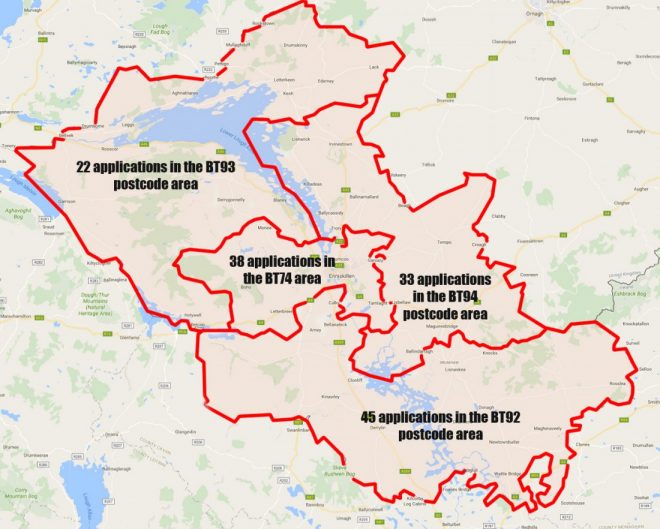 IT HAS emerged that 128 Fermanagh-based farms and firms signed up for the non-domestic Renewable Heating Incentive (RHI) scheme, potentially pocketing an estimated £3m.
The figures, obtained by the BBC’s Stephen Nolan Show, suggests that there are around 14 more recipients based in the county than was previously thought.
The Department of the Economy had previously revealed to this newspaper that of the 1,946 applications to the scheme, there are 114 active accredited applications in this county with payments to date totalling just over £2.6m.
A breakdown of the locations of business recipients by post code area reveals that of those businesses that are profiting from the scheme across the North -1,014 are commercial, 871 are the agricultural poultry industry and 243 are farms.
It’s now estimated that around 850 of the 2,128 recipients – or one third – have post codes mainly in counties Fermanagh and Tyrone. Of the applications, 38 came from the Enniskillen area (BT74), 45 in East Fermanagh (BT92), 33 in the north of the county (BT94) and 22 in West Fermanagh (BT93).
Across the North it seems both predominantly nationalist and unionist areas are both well represented with particularly high numbers of recipients in south Tyrone, west Tyrone and mid-Antrim,
Responding to the figures, Ulster Unionist MLA Rosemary Barton told the Herald that it’s unfair to point fingers at people who have legitimately installed RHI boilers.
“The vast majority of people have availed themselves in good faith of a generous government scheme with the laudable aim of increasing the use of renewable energy sources. While there are obviously a large number of these boilers in our area, the focus should be on ensuring that the scheme was not abused and on mitigating the overspend as far as possible to protect the taxpayers of Northern Ireland.”
Sinn Fein MLA Sean Lynch said: “We asked for the list to be published and we repeatedly asked for that. If there are nationalists on it, so be it. A lot of people didn’t know about the scheme, they didn’t know it was out there as it wasn’t very well publicised at the time.”
The SDLP’s Richie McPhillips added: “I have no problem with those people who are using the scheme for good and legimate business reasons and they should have nothing to fear. Those who have been using the scheme in an incorrect fashion should stop now. They have assisted in bringing this whole scheme into disrepute and placed a further burden on taxpayers that they can least afford to take.”
Meanwhile the Economy Minister Simon Hamilton will reveal the names of businesses benefitting from the RHI Scheme next week. Mr Hamilton said today that “in accordance with legal obligations”, it would be his intention to publish RHI recipient details on Wednesday 25 January.