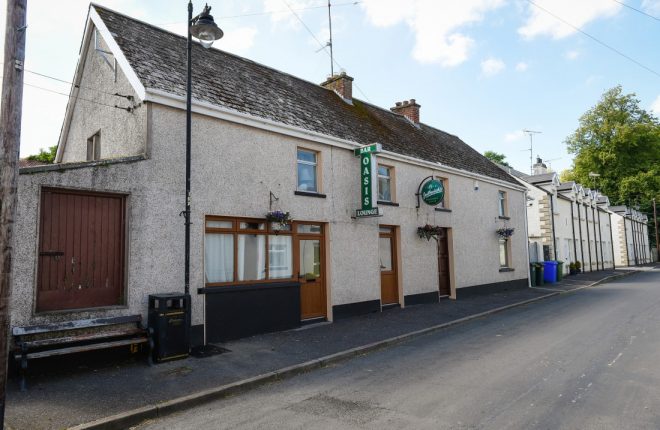 A 52-year-old pub licensee has been fined £1,000 after patrons were found drinking on his Magheraveely premises after hours.
Basil Wiggins, of Mullynagowan, Newtownbutler, has been the license holder at the Oasis Bar, Magheraveely for 22 years and was convicted at Enniskillen Magistrates Court of permitting the consumption of alcohol outside permitted hours.
The prosecutor outlined that on June 5, 2016 police were on mobile patrol in Newtownbutler when they observed a group of 20 people standing outside the Oasis Bar, Magheraveely at 2.20am.
Police arrived and noted the front door was locked, but could see lights on inside. When police went around to the back of the premises they could hear voices talking and laughing. Officers observed more people sitting on a picnic table in the area at back the pub and noted that most had a pint glass or bottle in their hands as staff members were clearing up.
The court heard that Wiggins, had been spoken to the previous evening and has a previous conviction for a similar offence dating back to October 2015.
Defence barrister Steffan Rafferty said it was unfortunate that the defendant found himself in this position.
“There were a small number of persons present who were staff and family members. This is a small bar and in the times that are in it, Mr Wiggins struggles to make ends meet. Any suspension of his licence would have a grave impact on him. He employs a number of part-time staff a couple of nights a week who would lose wages,” Mr Rafferty added.
Deputy district judge Ted McGill gave Wiggins full credit for his early plea but said his hands were tied by legislation which meant that there would have to be a suspension of the licence.
Wiggins was handed a one month licence suspension and fined £1,000.