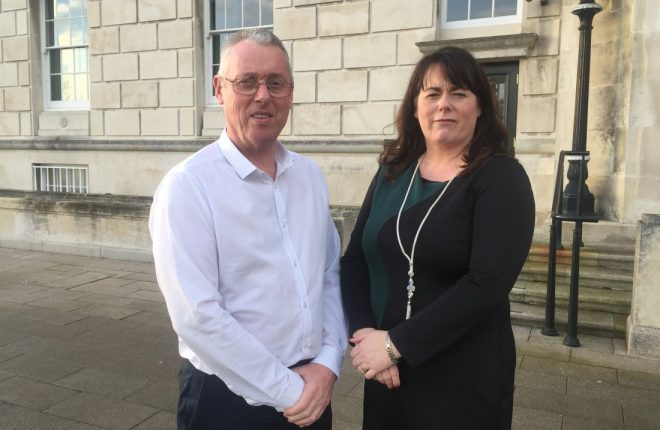 SINN Fein’s Sean Lynch has come out fighting following Martin McGuinness’ resignation on Monday, insisting even after the election there would “no going back to the status quo.”
Lisnaskea man Mr Lynch cited “corruption and arrogance”, disrespect for the nationalist and republican communities, and a range of other issues such as LGBT rights as among the reasons for the outgoing Deputy First Minister’s sudden departure, and stated the controversy over the Renewable Heat Incentive (RHI) as simply the deciding factor in the collapse of the Assembly.
“We have witnessed scandal after scandal,” said Mr Lynch. “Sinn Fein decided to call time on what was going on, and it was the RHI that broke the camel’s back.”
Mr Lynch said other issues included the “insulting” disregard for the Irish language, the alleged connection between unionist politicians and unionist paramilitaries, the treatment of the LGBT community, and, most of all, the arrogance of the DUP and the disregard for tenants in the Good Friday Agreement.
“The DUP’s behaviour in this situation has resulted in Sinn Fein’s patience running out,” he said.
“There needs to be an attitude change to treat nationalists and republicans with respect. Martin McGuinness has stretched himself for reconciliation and there has been no reciprocation.
“The DUP think their leader is the Prime Minister, but she is not, it’s a joint ministerial office. There will be no going back until that is recognised.”
He added: “Regardless of what comes out of the election, we will not go back to the status quo. We don’t know what will be beyond the election.
“Unless the DUP are prepared to share power on a co-equal basis it will be unacceptable.”
Mr Lynch said he was confident there would be an election, as “the people want to have their say on this one” and said Sinn Fein would fighting to maintain every seat. As such, the party will be holding a series of meetings in the coming days to decide their strategy, including a public meeting at the Donn Carragh Hotel this Thursday night.