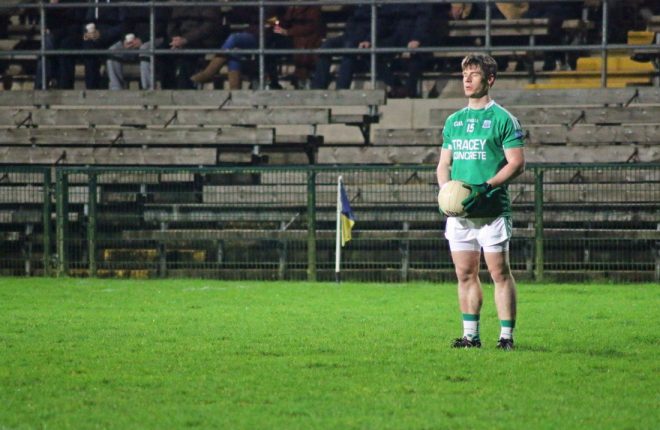 However, despite taking on the Saffrons numerous times since that blow to the pride, they have surely never played quite such poor-spirited and wayward Antrim outfit.

They absolutely demolished the visitors who looked like they had little interest in the match beyond fulfilling the fixture.

That wasn’t Fermanagh’s concern though and they were convincing as they tore asunder the visitors with a relentless stream of points.

The first half was, quite literally, one way traffic. Fermanagh had seven different scorers on the mark as they ran up an 11 point interval tally. By contrast all Antrim had to show for their efforts was five wides.

Frankie Fitzsimmons men did at least make the hosts work for their scores in the early stages. Their first point came after three minutes when Tomás Corrigan had to ride some torrid tackling before setting up Paul McCusker to curve over.

Despite Fermanagh’s dominance they only had one real goal opportunity in the first period. Eoin Donnelly claimed the kick out and fed Cathal Beacom who put Aidan Breen one on one with Ronan Hanna. However Breen’s shot was tame and the Aldergrove man was able to save.

It said something for the way things were going for Antrim though, that the ball was sailing back over the crossbar seconds later, Barry Mulrone sending over a quality shot.

Corrigan caused endless trouble for a frazzled Saffron defence and on the quarter hour mark he won and converted his own free in front of the posts.

A minute later Cathal Beacom, in on his senior debut, boomed over a super effort from the right to take Fermanagh to 0-5.

Corrigan was again the creator shortly after for Patrick Reihill who arrowed over from an acute angle on the right to put two goals in it.

Pete McGrath’s men were now laying siege to the Saffron posts and Aidan Breen took advantage to pump over two points in three minutes before Corrigan took his tally to three with another free.

As the break loomed a Cathal Beacom shot was deflected out for a 45, which Sean Quigley guided over with his customary aplomb.

Directly after that Aidan Breen was fouled catching Hanna’s kick out. Declan McCusker took the free and switched over to Quigley who was out on the right and he fired over a beautiful shot off the outside of the right boot to put the cap on a flawless half of football from the hosts.

Fermanagh opened the second half scoring in sumptuous style Lee Cullen took a great catch ahead of Stephen Beatty and a slick passing sequence from Cullen to Barry Mulrone and Daryl Keenan saw Aidan Breen put through on goal. The Tempo man just couldn’t get his body over the ball so his stinging shot went over rather than under the bar

Then after a full 44 minutes of football Ryan Murray, mainly through the sweat of his own brow finally opened the Antrim scoring with a high lofted effort.

Sub Eddie Courtney answered that impertinence by slamming over a sumptuous shot off the outside of the boot with his first touch of the ball, while Corrigan got in on the act directly after by swinging over his first score from play

As the game wound down Barry Mulrone profited from a malfunction in the Antrim kick out to collect a sideline delivery and split the posts with a leisurely effort and take the hosts to 0-15. Not long after Tomás Corrigan was again showing his strength, holding off his man well before drilling over a superb score.

With 59 minutes on the clock Tomás McCann won and converted his own free, repeating the trick two minutes later.

That was to be as good as it got though as subs Ryan Hyde and Eddie Courtney combined to score, Courtney’s shot going over with the assistance of the left post.

As full time loomed Aidan Breen slotted a free after Paddy McBride was black carded to put the tin hat on a miserable night for the visitors.

Meanwhile a beautiful score from the impressive Eddie Courtney wrapped up a facile victory for Pete McGrath’s men.