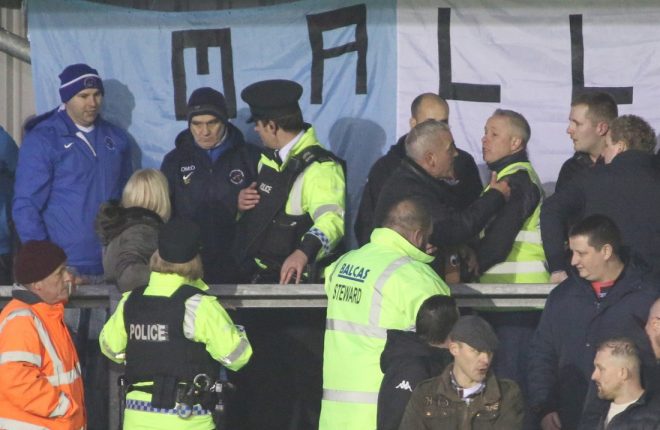 Police in the stands at the Ballinamallard v Crusaders game.

There were some unsavoury scenes in the terraces at last Saturday’s Premiership clash between Ballinamallard United and Crusaders as opposing fans clashed in a flare of tempers.

While the trouble was quickly brought under control it has raised some concerns about separation of home and away supporters at Ferney Park.

A Crusaders fan is believed to have initiated an incident which saw the police intervening to restore order.

“There was an altercation between the rival fans and they were separated. There were no arrests and no further complaints,” the PSNI told the Fermanagh Herald. The flashpoint has highlighted an issue which Ballinamallard are now working to resolve.

“We take any issue like this seriously,” said Club Chairman Jeff Aiken. “In the three years that I’ve been attending every week I’ve never seen anything before. It’s never nice to see and if there are kids around to witness that it’s not good, but we were lucky that the police were in the ground and got over fairly quickly.”

Aiken says Ballinamallard are taking steps to ensure there’ll be no repetition of such scenes at the venue.

“We have segregation in place and generally it works very well with the away supporters going to the Village Stand. But we have recognised that in asking away fans to do that, they are walking past the home stand.

“We have committed to addressing that. It may well mean that we change the home and away stands with the away fans moving to the Fisher Stand and the home fans going to the Village Stand.”

“We’ve never felt the need to have a physical line of stewards and we don’t want to throw the baby out with the bath water. Whatever we do we want to engage with our own supporters and bring them on board.

“I’ve spoken with the head of stewards today to make sure that going forward no away fans can go into the home stand. I’ll also be speaking to the chairmen of visiting clubs telling them to bring their own stewards to ensure that their fans stand in the designated area.”