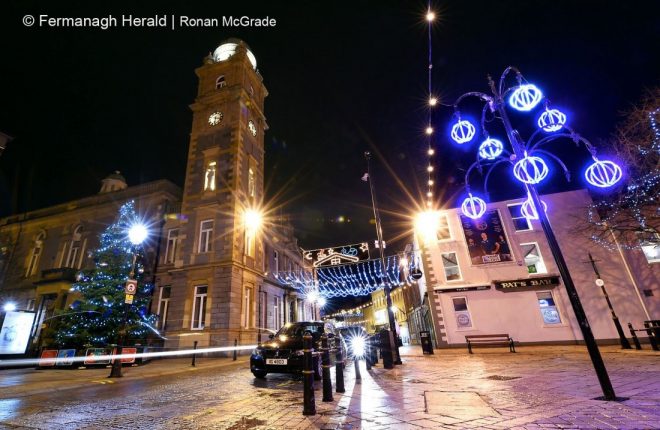 IT HAS emerged that Enniskillen Christmas festivities cost only half of Omagh’s switch-on. The cost of hosting the Christmas lights switch on event in Enniskillen was approximately £7,100, while Omagh’s Christmas lights switch on event cost approximately £12,650.
Enniskillen’s Christmas lights were turned on by chairman of Fermanagh and Omagh District Council, while Omagh had Country music sensation Lisa McHugh switching on their lights.
On Facebook, a number of people complained about the Christmas light switch on in Enniskillen, stating their disappointment at the event.
Enniskillen woman, Rita Cassidy attended the event and expressed her disappointment
“I feel that Enniskillen got a poor deal with the switching on the lights. Many members of the community have agreed to a suggestion to enhance the party atmosphere in the town which would
encourage more people to visit.”
Another disappointed mother stated that “Unless you were lucky enough to get close up to the stage, you couldn’t see anything from further down the street. It was great to see such a big crowd in the town, but the positioning of the stage made it difficult to see any of the festivities.”
Fermanagh and Omagh District Council have said that the difference of cost is down to health and safety and the staging for both events event.
“The difference in cost between the two events can be mainly attributed to the anticipated estimated attendance at each event which had a direct impact on health and safety costings. The expected estimated attendance at the Enniskillen event was 2,000 people whereas an approximate 6,000-8,000 people were expected to attend the Omagh event.
Additional health and safety resourcing, for example event stewards and first aiders, was therefore necessary at the Omagh event.
The nature of the Omagh event site also required the hiring in of staging from an external supplier which resulted in additional cost. In Enniskillen, the nature of the event site in the Diamond was suitable for the council to make use of its own staging.”
Since both switch ons, the Council have released a survey so people can give their opinion on the Christmas light switch on in Enniskillen and give their suggestions on how to improve next year’s event.