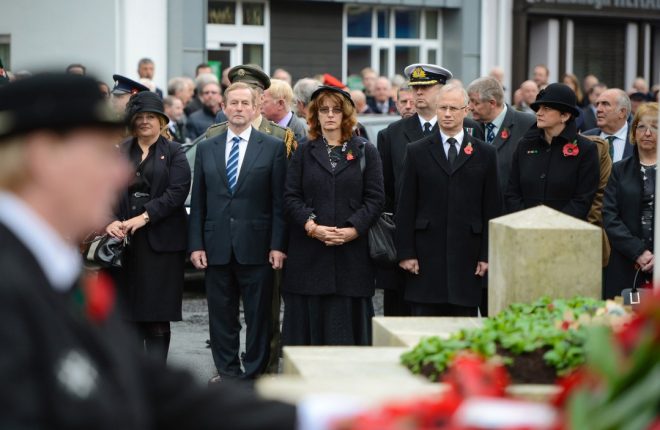 Taoiseach Enda Kenny will join the First Minister Arlene Foster in Enniskillen this weekend when he returns to lay a wreath at the war memorial on Remembrance Sunday.
It will be the leaders’ first meeting since Mrs Foster’s caused a stir when she claimed that the Republic was poaching investment business from Northern Ireland in the aftermath of Brexit.
At her party conference two weeks ago, the DUP leader controversially accused the Republic of talking down Northern Ireland in order to poach investment. Mrs Foster also declined an invite to last week’s All-Ireland Civic Dialogue on Brexit in Dublin, organised by Mr Kenny. She previously described it as a “grandstanding exercise” and said she had better things to do than “be a lone voice amongst a whole lot of remoaners”.
A spokesman from the Taoiseach’s office confirmed Mr Kenny’s attendance at the ceremony in Enniskillen on Sunday.
Speaking last week, Mr Kenny said that the First Minister’s claims at the DUP conference would not affect their relationship.
“I have a very good working relationship with Arlene Foster and I respect her for the First Minister that she is. I’ve been to Enniskillen with her a number of times for the last six years. Those comments do not interfere at all.
“This is about the national, the island challenge that we have, and we will be working very diligently with the First and Deputy First Ministers and with the Executive and the sectors in the interests of the economies and of the people North and South,” he added.
Sunday will mark Mr Kenny’s fifth consecutive appearance at Enniskillen’s Remembrance Day commemoration and service where he will join other politicians and ex-servicemen and women.
Those in attendance will remember the many campaigns in history including the two World Wars, the Enniskillen bomb 29 years ago and the Battle of the Somme 100 years ago.
The parade and service in Enniskillen will lead Remembrance events throughout Fermanagh on Sunday including Lisnaskea, Irvinestown, Lisbellaw, Maguiresbridge, Kesh and Brookeborough.