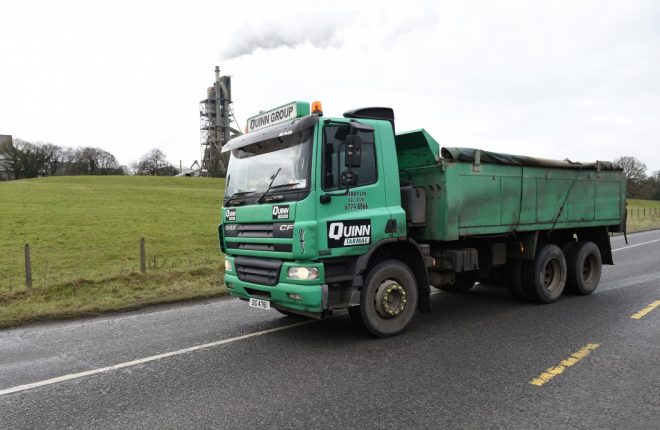 IT is becoming increasingly likely Fermanagh’s border will become an international frontier in the coming years, complete with customs checks, as moves towards a Brexit continue.
This week the Herald spoke to the head of policy in the North for the Freight Transport Association (FTA), Seamus Leheny, who has been meeting with the Northern Ireland Office and various MLAs to discuss the impact of Brexit on the industry.
FTA have over 350 members, businesses who moves their goods by rail, air or sea. Many of their members are here in Fermanagh, such as Quinn Industrial Holdings Ltd.
Mr Leheny said the biggest concern among FTA members was the implementation of customs administration along the border.
“It’s almost certain now the UK will be leaving the European Customs Union, which you cannot be a member of if you are to restrict free travel. That will see the Irish border becoming an international frontier,” he said.
“There will certainly be some sort of customs checks for companies in Fermanagh,” he continued, explaining the concept of “cabotage”, which means companies can currently transport and deliver goods in other EU countries. For example, it means a Fermanagh company can operate in Donegal or Cavan.
“Cabotage could be lost in the Brexit,” said Mr Leheny. The thing is, England will probably benefit from that as they currently have Polish, French and Dutch lorries, for example, coming in, lifting loads and delivering them around the country.”
The Donegal man what now had to be decided what form the inevitable Brexit customs checks would take.
If we’re going to have customs for freight, we can’t have manned customs,” he said. “They have a system in Norway that isn’t ideal, but we could look at.”
Mr Leheny explained the Norway system used cameras to log passing lorries on their border, with the drivers previously logging what goods they were carrying on board, and that it was up to customs officials whether they decided to stop these vehicles or not.
However, as he pointed out, this system is only in operation on ten Norwegian border roads, which transport companies are restricted to using. Mr Leheny said this would, in reality, probably not be suitable in the North.
“Can you imagine if they limited it to six roads in Northern Ireland, for example, the problem it would cause for a company in Derrylin if that Belturbet road was not one of them? It would be a farce.
“There are a lot of practicalities that have to be worked out.”
In addition, he agreed that any impact on hauliers and transport companies, who will likely see their overheads rise as a result of Brexit, would have a “knock on effect” on the economy as a whole.
“Brexit is definitely going to happen now. We just have to see what benefits we can get out of it,” concluded Mr Leheny, adding solutions that suited some may cause increased problems for others.