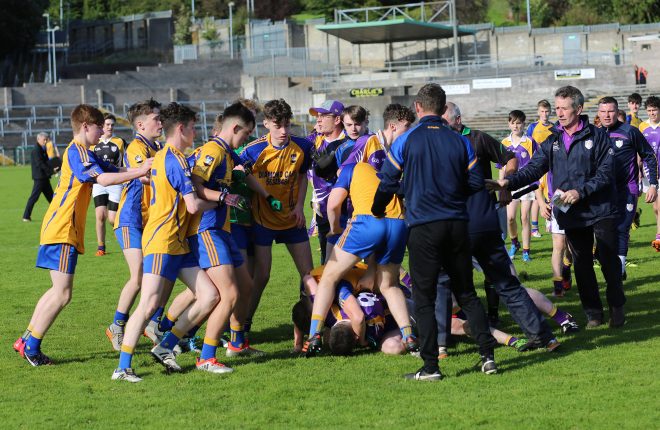 The scene at the Brewster Park final on Sunday

Fermanagh GAA’s showpiece finals day was marred by fighting among players following the u16 decider between Derrygonnelly and Enniskillen Gaels.
Derrygonnelly won Sunday’s game 1-11 to 2-6, but shortly after the final whistle ugly scenes erupted in front of the John Vesey Stand. Players from both sides swung wild punches at one another in an all-in melee played out just metres from the packed stand.
Mentors were also struck in scenes watched by a crowd which included a large proportion of children, present to enjoy the blue riband event of Fermanagh’s club football season.
While the brawl unfolded after the final whistle, an experienced official confirmed that participants should still expect to be severely dealt with.
“The players were named on the team list, they were on the field of play. The final whistle might have gone, but that makes no difference. The referee will complete his report with the assistance of his match officials. Action will be taken and the CCC [Competitions Control Committee] will probably have something formally to say to the clubs as well.”
St Patrick’s whistler, Karol Bradshaw, who had taken charge of the u16 decider had enjoyed an exemplary 60 minutes prior to the flare-up. However those post-match scenes mean his report will now have to record a slew of serious disciplinary infractions, exacerbated by being played out in front of a large county final attendance of 3,400.
Given the circumstances, the official explained that the clubs concerned should prepare for swift action on the matter. The referee’s match report is generally expected by the CCC, the body which deals with disciplinary issues, within three days of the game. This should allow time for sanctions to be imposed ahead of this weekend’s division one league final which sees Derrygonnelly and Enniskillen meeting again in Belcoo.
“It would have to be a full CCC meeting to determine what actions have to be taken,” said the official. “If the report is in, the likelihood is there could be a CCC meeting today (Wednesday), or a determination made and notification given to the clubs.
“As a neutral supporter it wasn’t very savoury, especially at underage level. It was very disappointing. We just have to wait and see what happens now,” added the official.