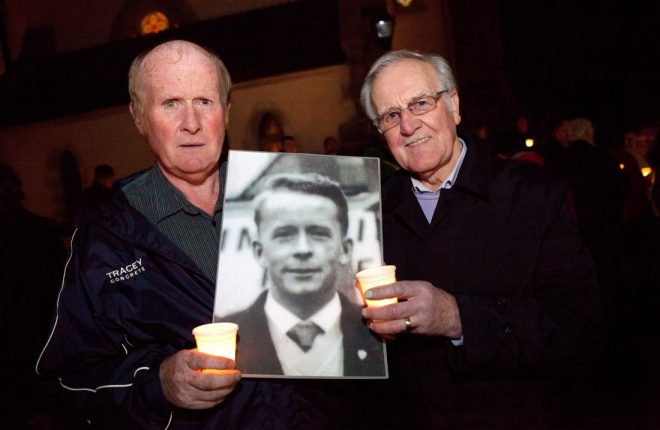 Frankie Naan (nephew of Michael Naan), left, with John Fitzpatrick at the memorial for his uncle in Newtownbutler in 2012 RMG04

A DOCUMENTARY exploring the devastating impact of three murders in Newtownbutler in the 1970s will be screened locally this week.
The TG4 documentary, ‘As Radharc na Sul – Out of Sight, Out of Mind’, centres on the murders of Robin Bell, Michael Naan and Andrew Murray, less than 48 hours apart in October 1972, and the impact the deaths had on their small community,
Directed by Sonia NicGhiolla Easbuig, the film documents how the murders continue to impact the Bell, Nann and Murray families, on the communities in the Fermanagh village. With interviews with members of the mens’ families, the film also reveals how the hunt for the Yorkshire Ripper led arrests in what became known as the Pitchfork Murders, due to the nature and number of stab wounds received by Mr Naan and Mr Murray.
“On Sunday, October 22 the IRA shot dead Robin Bell, a member of the UDR, few miles outside Newtownbutler,” said Deaglan O Mochain, producer. “His father and brother were in the car with him when it was attacked, and while they escaped serious injury, they were obviously deeply affected by what they had witnessed.
“On Tuesday, October 24, a local man found the bodies of Michael Naan and Andrew Murray on the Nann family farm a few fields away from the Bells. As far as many locals were concerned, these two nationalists had been stabbed to death in revenge for the murder of Robin Bell, and an already divided community was driven further apart through mutual fear and suspicion.”
However, as shown in the film both Richard Bell, Robin’s brother, and James Naan, Michael’s nephew, and the families of the men were totally opposed to violent attacks or any sense of retaliation at the time, but were powerless to prevent further community division.
Speaking to the Herald ahead of the screening, James Naan said: “I can remember clearly the parish priest, Fr Duffy, even reading out his homily at the funeral that the families didn’t want any retaliation.”
Indeed, as Herald archives revealed, Fr Duffy preached: “This week I have visited three families to offer my sympathy in tragic circumstances. I have met three mothers, each mourning the death of her son. All were confused, bewildered and frightened. None had any thoughts or words of bitterness, much less of revenge.”
The documentary also highlights how, during what was the worst year of the Troubles, there had bee no arrests or breakthroughs in the investigations in any of the men’s deaths.
In fact, it was only  later in the decade that a former solider, mistakenly believing the Yorkshire Ripper had possibly been one of the Naan and Murray murderers, came forward with information which lead to the arrests of several Scottish soldiers. Four were convicted of playing a role in the murders, one of whom was convicted of murder.
No convictions were ever made in Robin Bell’s case, while both the families of Michael Naan and Andrew Murray believe others have escaped justice.
Mr Naan said he recalled how, upon visiting their family farm after the murders, there were “little forensics done” and the scene of his uncle’s death had obviously been cleaned up by the British army and was clear of any blood, despite his uncle’s injuries.
“There was a lot of army around the farm all during the wake,” he added, explaining they even called to the family home in the weeks that followed to question his uncle from Canada. “They were never far away,” he added.
Mr Naan, who was 17 at the time of the murders,  explained how his uncle was like a father to him, following the death of his own father when he was 12. He said he’d always spent his free time and summers on the farm, and had found it hard to deal with his feelings following Michael’s death.
“The whole thing is very emotional. It’s difficult,” but said the documentary was a credit to those  who made it. “Since the 40th anniversary in 2012, everything has come back. The hurt I had I never expressed to anyone.”
Mr Naan explained that their family farm had been surrounded by Protestant farms and his uncle, who was a popular man, and he had always got along with everyone in the community.
“The bitterness I hold is only towards the British army, not any locals,” he said.
“The documentary has helped take away a lot of the frustration and anger. It’s given me the opportunity to realise some of my feelings. It’s good to let the local people know what happened too.”
Mr Naan was full of praise for those who made the film, as well as local historian and journalist Brian MacDomhnaill, who wrote the book ‘The Pitchfork Murders’ which Mr Naan said had provided a deep and valuable insight into the murders.
“If not for the time and hard work Brian put into his research, we may never know what we do,” he said, adding praise for Margaret Urwin and the Pat Finucane Centre’s Paul O’Connor, among others.
The film be broadcast on TG4 on Tuesday next, October 25. It will also be screened as part of the Clones Film Festival on Friday, October 28.
Mr O Mochain concluded: “While community relations in Newtownbutler have improved as the tension and fear associated with the conflict dissipates, like most victims, the families are still looking for a full account of what happened to their loved ones, but feel that realistically, they will never fully uncover the truth of what happened on the Fermanagh border in October 1972.”