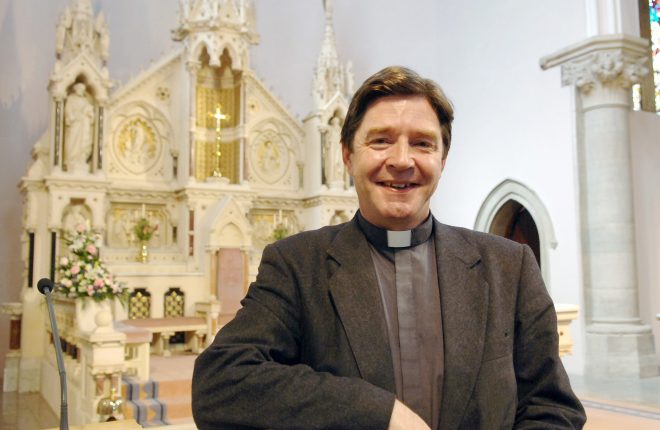 LISNASKEA’S Monsignor Joseph McGuinness says he has been overwhelmed by the goodwill and support he has received from the people and priests of the Diocese of Clogher since his appointment as Diocesan Administrator.
The 57-year-old stepped into the role earlier this month following the retirement of Bishop Liam MacDaid on health grounds.
Mgr McGuinness is now responsible for administering the day-to-day affairs of the diocese until a new bishop is appointed by Pope Francis. He will also attend meetings of the Irish Bishops’ Conference.
Speaking to the Herald, he explained that his new role involves taking on some but not all of the powers of being a bishop.
“In a sense it is a caretaker role as it is not a role to innovate or introduce new initiatives but to ensure that the pastoral care of the people of the diocese is maintained and that day-to-day business is conducted and discharged effectively. I am very conscious of the fact that this is only a temporary role that will exist only as long as the diocese is without a bishop but I intend to fulfil it to the very best of my ability.”
Mgr McGuinness says it is likely to be some time before Bishop MacDaid’s successor is appointed.
“At present in Ireland there are around seven dioceses awaiting the appointment of bishops, either those that are vacant or those where the bishop has stayed on after the normal retirement age of 75. Within that, Clogher will have to fit in and wait for the consultation process to go on. It is impossible to tell when an appointment will be made to our diocese.”
A native of Lisnaskea, the Monsignor has spent most of his ministry in Enniskillen. He was educated at St Michael’s College, Queen’s University Belfast and St Patrick’s College, Maynooth before being ordained a priest in 1984. He pursued post-graduate studies in liturgy and sacramental theology at the Institut Catholique, Paris and completed teacher training in St Mary’s University College, Belfast. Appointed to the staff of St Michael’s College as a teacher of religion, science and music in 1988, he later served as president of the College from 2000 until 2006. After this he became parish priest of Enniskillen in 2007 before Bishop MacDaid appointed him diocesan secretary, chancellor of the diocese and administrator of the parish of Tyholland in Co Monaghan three years later.
Mgr McGuinness said the diocese faces many challenges, particularly the diminishing number of priests.
“There is a challenge for us to attract many people of all ages who may feel that they are drawn to giving their life ministry within the church, whether that is through the priesthood or lay ministry. In the last few years in this diocese, we have been fortunate to have had several men come forward for ordination, all of whom had embarked on successful careers in other areas but felt that their true happiness lay in ministry.”
Mgr McGuinness said it was a privilege to have worked alongside Bishop MacDaid for the last six years.
“He will be sadly missed by the people and priests of the Diocese because of his great sensitivity, kindness and great leadership. At the end of the day, his health was deteriorating somewhat and it made sense for him to retire now. During his tenure, he had a collaborative style of leadership and saw his clergy as a team doing our best to minister to the people of the diocese.  “He also oversaw a lot of work in the field of adult and child safeguarding and was very ecumenical in his outlook, developing good relationships with other Christian churches, in particular with Bishop John McDowell, who is a great Episcopal leader in his own church. “I look forward to working with him to enhance the relationships between all of our communities in the Diocese, North and South and with other Christian traditions.”