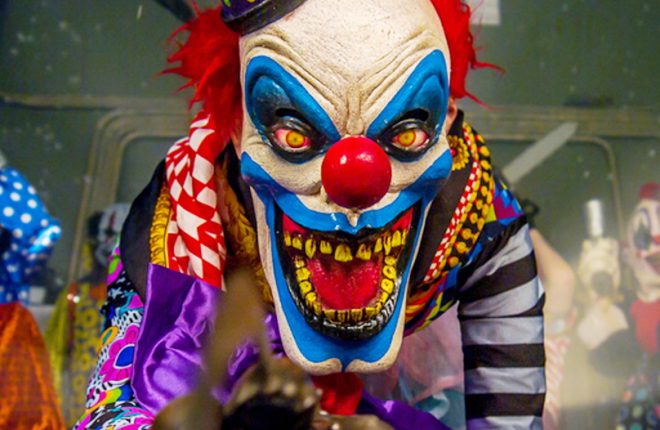 Scary clowns have been appearing across the country in recent weeks

FERMANAGH sufferers of coulrophobia should proceed with caution in the coming weeks after it was confirmed the so called “killer clown” craze had reached the county.
Police in Fermanagh have confirmed there have been reports of people wearing clown masks in the area, adding there was “nothing more sinister than that”. However, with the craze sweeping the country, being fuelled by social media, and schools from Belfast to Dublin to Derry being put on alert after either being visited by creepy clowns or being threatened with a clown visit, many are on the look-out locally.
In a statement released to the Herald, Chief Insp Clive Beatty said: “It is worth noting that the ‘Killer Clown’ costumes in their own right are not illegal, especially on the run up to Halloween when people are going to be dressing up to go to parties. Where it becomes a problem is when common sense fails us and people push the limits.
“According to the law, common assault is any act which intentionally or recklessly causes another to fear immediate, unlawful violence. This means that if you cause someone real fear, whether you mean to or not, you could be committing an offence.
“Possession of an offensive weapon is any item made, adapted or intended to cause injury. Disorderly behaviour likely to cause a breach of the peace. Simply put, this is behaviour that is not orderly and both offences carry an immediate fine of £85 but could (depending on the circumstances) land you in court.”
He added: “We like to approach every report with the same degree of common sense. However, where child safety and public safety is concerned we will take appropriate action.”
Local police have also contacted local schools, issuing similar advice to that above. Those schools the Herald spoke to were well aware of the craze, but said they were relieved to say there were no reports of sinister clowns in their schools.
“Thankfully we haven’t experienced anything here, but we have addressed the issue in our assembly,” said Jimmy Jackson, principal of Erne Integrated College. “We raised it in assembly to let students know of the pitfalls that come with partaking in this type of thing as we were contacted by police and are aware the craze is sweeping Northern Ireland.”
Principal of Devenish College, Simon Mowbray, said they too were aware of the phenomenon.
“We have addressed the issue with our pupils in our personal development lessons and have pointed out that while this may be seen by some people as being funny, it can have the completely opposite effect on the victim.
“The police have advised us to inform our pupils that while they do not want to spoil anyone’s fun, if taken too far, there is a the possibility that an offence may well be committed. We have fulfilled that obligation and appealed to the better nature of our pupils.”