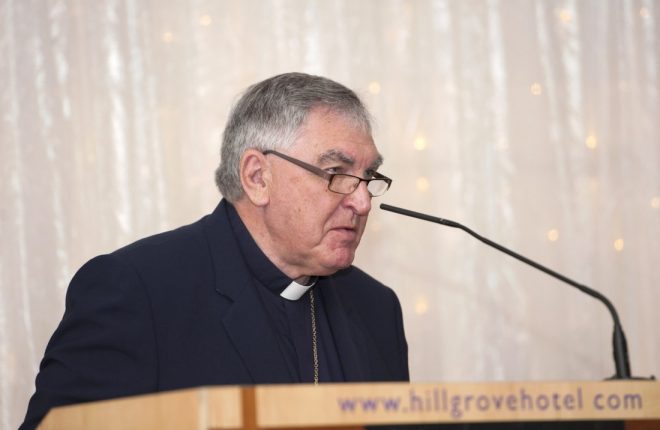 THE priests and people from all parishes across the Diocese of Clogher will honour the Episcopal ministry and gifts of Bishop Liam MacDaid at an event next month.
It was confirmed earlier this month that Pope Francis had accepted Bishop MacDaid’s request to retire, made some months ago on medical advice. His retirement was due to an ongoing battle with Parkinson’s Disease and took immediate effect.
Bishop MacDaid was ordained a priest in 1969 and later taught at St Macartan’s College in Monaghan town, where he was also president for nine years until 1989. A keen GAA fan, he also lined out for his native Donegal in the 1970s.
Appointed Bishop of Clogher by Pope Benedict XVI on 6th May 2010 in succession to Bishop Joseph Duffy, he was ordained on 25th July in St Macartan’s Cathedral, Monaghan.
The 71-year-old Bundoran man was present at the annual clergy conference of the Diocese of Clogher on Wednesday in Monaghan along with his fellow Bishop-Emeritus of the diocese and predecessor Bishop Joseph Duffy. Last week’s General Conference of Clogher priests was presided over by the Diocesan Administrator, Monsignor Joseph McGuinness and included an address by Fr Peter McVerry SJ on the topic ‘The God of Mercy: A Church for the Poor’. Fr McVerry is well-known for his work with the homeless and disadvantaged and as an advocate for social inclusion.
It was also announced at the conference that there will be a special Diocesan Mass of Thanksgiving for the ministry of Bishop MacDaid. The event takes place in St Macartan’s Cathedral, Monaghan, on Sunday 20th November at 3pm, followed by a reception in the Hillgrove Hotel nearby. All 37 parishes in the diocese will be represented through participation in the liturgy.
A spokesman for the Diocese told the Herald: “The event on 20th November will be an opportunity for all the priests and people of the diocese to express their thanks to God for Bishop Liam’s ministry, his many gifts and the generosity with which he shared them.”
Further details will be announced closer to the date.