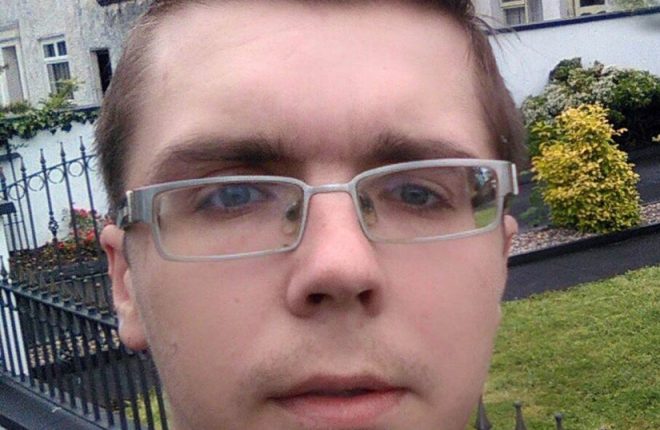 Kristaps Smilskalns died in the two car crash in Enniskillen on Saturday afternoon.

THE FUNERAL takes place today (Wednesday) of a popular Latvian man who died following a horrific weekend road crash in the county.
Kristaps Smilskalns had just set off from his home on Main Street in Swalinbar on a fishing trip to celebrate his 25th birthday when he was involved in the two car crash on Saturday afternoon.
The collision involving a silver Seat Leon and a silver Vauxhall Astra occurred on the Derrygonnelly Road in Enniskillen at approximately 2pm. Three other people, two men and a woman, were also injured in the crash. The victim was a passenger in one of the cars being driven by one of the men and the two others injured were in the other vehicle. Those injured in the crash remain in hospital and are still receiving treatment for their injuries.
Mr Smilskalns had moved from Latvia to Swalinbar in recent years with his mother, brother and sister.
Francis O’Reilly, who runs Spa Service Station in Swanlinbar, told the Herald that he was a popular member of the Eastern European community in the area.
“He was a lovely fella, very caring and helpful and spoke to everyone. He had very good English and acted an interpreter for his friends from Latvia and Lithuania who live around here. Because he knew everybody, he was the go-to man if they needed help with translation or he would get their messages for them.
“He got involved in local community events and would often have been seen playing pool in the pub. He died on what was his 25th birthday, which is the saddest part of all.”
Ulster Unionist MLA, Rosemary Barton, expressed her sympathy to the family and friends of Mr Smilskalns.
“It is with great sadness that I learned of the fatality following the accident on the Derrygonnelly Road in Enniskillen on Saturday afternoon. I wish to express my heartfelt condolences to the family and friends of the man who died and also wish a full recovery to the other people involved in this crash.”
Mr Smilskalns is survived by his mother Ilze and her partner Andrews, his daughter Nensita (Latvia), his sister Sintija, brother Lucas, work colleagues and many friends.
His Funeral Mass will be held at 12 noon today (Wed) at St Mary’s Church in Swanlinbar followed by cremation at Lakelands Crematorium on the Dublin Road in Cavan.
Police say they believe that a small black van was in the area at the time of the accident and may have witnessed the collision. They have asked the driver of this vehicle, or anyone else who may have seen either car in the area at the time, to contact Enniskillen Police Station or the Collision Investigation Unit on the non-emergency number 101.
Mr Smilskalns is the second man to lose his life on Fermanagh’s roads in less than a week. Meanwhile the funeral took place earlier this week of David Legge who died two days after being injured in a road crash in Kesh last weekend. Mr Legge, who was in his 70s, died following a three vehicle road traffic collision on the Drumwhinny Road at around 4pm on Saturday last, October 8th. The victim was one of three elderly occupants of one car while the second car involved contained a woman and young children.
Late of Comber, Co Down, Mr Legge’s funeral service was held on Monday morning at Belfast’s Roselawn Crematorium. He is survived by his wife Rosemary and family circle.