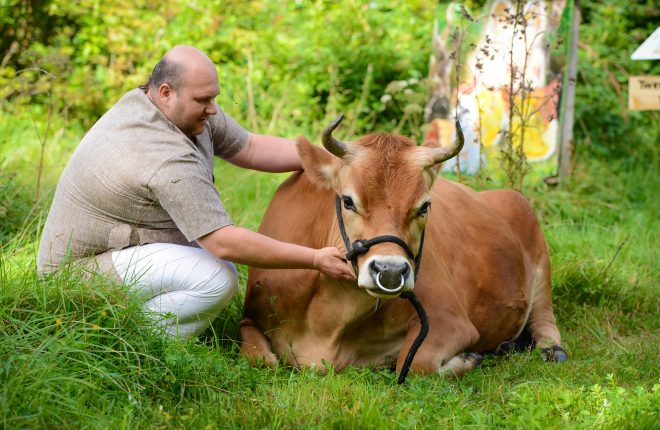 NESTLED among the many islands of the Erne is the pretty, wooded isle of Inish Rath, home to possibly Fermanagh’s smallest religious community.
For the past 30 years, members of the International Society for Krishna Consciousness (ISKCON), known to most simply as the Hare Krishnas, have called the island home. Since 1986, this group has been ever changing, attracting members from all over Ireland and far beyond.
While there are currently only 12 full time residents at the settlement – which is made up of gardens, children’s play areas, grazing ground for cattle, allotments for growing food, a school, open fields, woodland walks, and, its the centre, a large Victorian house that hosts stunning altars to Lord Krishna – that number often grows up to 20, and often includes families and children.
Last week, when the Herald visited, Hare Krishna Island was buzzing with activity and visitors having travelled from all over Ireland to the idyllic lakeland temple to mark one of the most important days in their religious calendar, Janmashtami. The warm summer air was filled with the sounds of signing and chanting, as others prepared a midnight feast that would follow that day’s fasting or put the finishing touches items for use in that night’s procession.
Janmashtami, explained temple president Gopal Acarya (Das), is Lord Krishna’s appearance day.
“Sometimes Krishna comes to deliver his devotees and to re-establish religious values in the world,” said Gopal, who originally comes from Poland. “We can see that from time to time, things go wrong, and Krishna comes in different ways or he sends his representatives like Jesus Christ is one of them, or Muhammad is another, we don’t reject representatives of God.”
Gopal explained that was one of the major aspects of Krishna philosophy, the acceptance of all God’s messengers and respect for all religions.
“We accept they come from all one come and represent the same one God, and they teach the same principles,” he said. “The principles of every religion is to love God, to obey him, to serve him, and to serve others. In this sense, it’s always the same thing.
“We understand God is one, like the sun is one. If you look in the sky while you’re in Ireland, it’s not that the sun became Irish. If you go to France it’s not French, it’s not Indian, the sun is one. God is like that also, he is one for everyone. He is always the same. He is the one person known by many different names.”
Fermanagh’s Hare Krishna Island is one of only three main centres for the faith in Ireland, the other two being in Dublin and Belfast. To get to the island, which the ISKCON bought when the opportunity came up in the 1980s, a ferry or rowing boat picks visitors up from Hare Krishna Quay, while curious paddlers or those on boats can drop by, using the visitors’ quay on the island.
The island is home to many animals and while this includes wild deer, most are domesticated. From pigs to dogs to peacocks, the most revered animals on the island are the cattle. As Gopal explained, all Krishna food is vegetarian, however they to eat milk products.
“We protect cows and we take care of them,” he said. “For us a cow is a mother because she gives milk, and we cooperate. Not only does she give milk but she is also a wonderful fertiliser.”
Gopal said all were welcome to visit the island, particularly on Sundays when they had a programme of events each week: “Tourists come and they cruise around. We tell them a little about Krishna and what Krishna culture teaches life to be better.
“Krishna consciousness is actually a proposal to everyone that you can change your life and you can be happy without alcohol, drugs and all those different things that people try to be happy through. We differentiate between pleasure and happiness. The things that give you pleasure but don’t give you satisfaction. The thing that gives you satisfaction is your contact with God.”
Explaining that for those who follow the Krishna teachings the ultimate goal is to die and go to the Lord, rather than being reincarnated into a new body in this world of suffering, Gopal said for those on the island, all that they do is informed by their desire to become spiritual beings. Rising at 4am for chanting and singing, and to discuss philosophical scriptures, he said “the foundation of our day is spiritual practice.”
“Generally our life is a spiritual life,” said Gopal. “We don’t separate the two.”