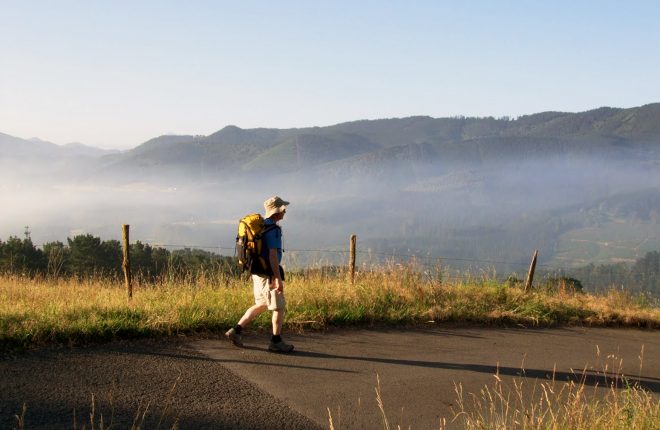 Fr Brendan walking the Camino in memory of his brother Donal.

AS Fermanagh prepares to mark World Suicide Prevention Day 2016 this Saturday, September 10, those worried about their mental well-being have been strongly  urged to reach out and ask for help, while loved ones have been warned to “take seriously any talk of death”.
“To ignore such talk, or to think that it might pass, is not entirely unlike thinking that a broken bone can heal itself without attention or support,” said Mgr Peter O’Reilly. “Such talk is a symptom of pain.”
Mgr O’Reilly, who has worked with many bereaved families, urged loved ones of those in mental pain to reach out and keep them connected, adding it was important to seek professional help.
“Much as I might be friends with someone, I wouldn’t take on to set one of their bones after a fracture,” he said. “Rather, I would seek or direct them towards the right kind of help.”
Stating suicide can often be “a permanent solution to a temporary pain”, Mgr O’Reilly added: “Personally, deaths by suicide seem to me to be a symptom of the isolation that can happen for a person today.  “For all the ‘social connection’ that social media today purport to bring, they can be quite isolating in reality. The preference for social media over actual contact can increase a sense of actual isolation and lead to a communication based on a wish to project an idealised version of ourselves, without our real issues or real pains. It can make us more vulnerable.”
Indeed, Jesuit priest Fr Brendan McManus, who originally hails from Lisnaskea, said he believed isolation played a large role in his brother Donal’s death in 2005.
“My brother would’ve been guilty of isolating himself too much, of not letting people in,” said Fr Brendan, who added he had tried to get Donal help for his issues but he had failed to take up the supports available to him.
“One of the key things, especially for males, is in reaching out to ask for help,” he continued. “You can’t do it yourself, and you can’t do it in your own head. You need to get help early, if you let things go they can build up. The greatest wisdom is to know when to ask for help.
“For many there is an  embarrassment and shame in asking for help. We need to break that stigma about mental health.”
Since his brother’s death, Fr Brendan has written extensively on the pain of bereavement by suicide, which he said “has a different kind of shape” and “brings different issues” than dealing with other deaths.
“The suicide of someone you love is like a blow to the soul that is invisible, goes in deep inside, and takes a long time to heal,” he wrote in his book Surviving  Suicide Bereavement – Finding Life After Death’, which explores his journey through grief and contains a lot of advice and wisdom for others enduring the same.  “Often, it is the spiritual questions that cause a lot of struggle,” said Fr Brendan, who also under took an “extremely cathartic” journey along the Camino de Santiago some years following Donal’s death, which he has written about in his book “Redemption Road.”
“The Camino is a symbolic journey, and is spiritual in a very grounded way,” he said. “If you’re suffering and in pain, you can work it out by walking.”
You can order Fr Brendan’s books at www.messenger.ie, and you can read more about his Camino journey at redemptionroadcamino.com.
Information on help agencies is also often available in St Michael’s Parish weekly messengers, and a ‘Living With Suicide’ retreat will take place at Lough Derg on Wednesday, September 21. For more information contact Fr Cathal Deery, Aghadrumsee.
Planting a tree of Hope
Meanwhile, to mark World Suicide Prevention Day this Saturday, the people of Belleek will be gathering to plant a “tree of hope” in the village.
Following on from the area’s hugely successful Darkness Into Light event this summer, which raised over £20,000 for Pieta House, the tree will be planted in the rose garden of Belleek Pottery in a special ceremony this weekend.
“We wanted somewhere everyone would see it and where it would be open to all the community,” said Ciara Hughes, chairman of Belleek Darkness Into Light. She added a beautiful engraved marble plaque by Kenny Roper would be placed with the tree, which was supplied by Gerry Dolan and will be planted by Minister Ngozi and Fr Beggan.
Ms Hughes added that, aside from raising tens of thousands, Darkness Into Light had “brought the community together” in Belleek, and the village also had raised money for the Aisling Centre through a draw.