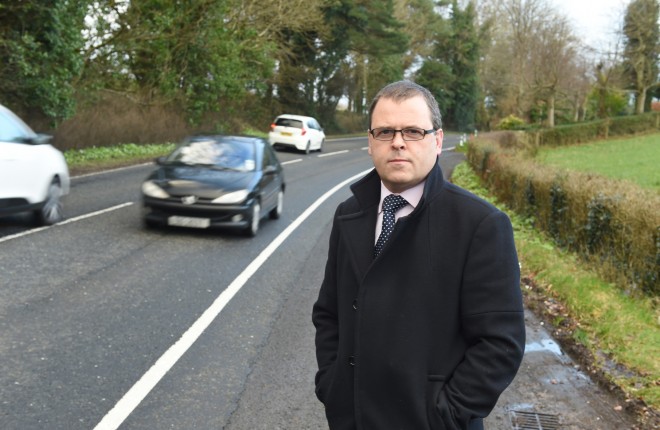 THERE are concerns drink driving may be on the rise again in Fermanagh, largely due to people’s ignorance of the law, and that the number of locals ending up in court could soar when new legislation is enacted.
While there has been a lot of publicity in recent times over the very real dangers of texting and using a mobile phone while driving, with the issue being seen as a “21st century problem”, there are indications locally that drink driving is far from a thing of the past.
In the same week that a driver who was three times over the limit escaped jail at a Fermanagh court, despite it being his fourth conviction, experts in the field have called for more education and awareness of the issue.
Joanne Smith, local manager of Drink Wise Age Well NI, said many people don’t even realise when they are over the legal drink driving limit, and explained they had surveyed their clients on the issue.
“What we found was that many people just aren’t aware of their units, and they might not even be aware they are over the limit,” said Ms Smith. “A lot of them particularly wouldn’t realise the issues regarding driving the next day. They may have been drinking at home,
and might not know how many units they had drank the night before.
“There still hasn’t been a sufficient way found to help people understand the guidelines regarding the number of units in each drink, and so on.
“A lot of people think a unit is one drink, they don’t realise many drinks have more depending on size and strength.”
Stating more needs to be done to help people understand how many units they had drank, and when they were OK to get behind the wheel, Ms Smith added: “For example, it takes an hour to process one unit of alcohol, and if you have five pints and stop drinking at midnight, that’s 12 units and means you can’t drink for 12 hours. Of course, everyone processes alcohol differently.”
While Drink Wise Age Well deal with clients over 50, PSNI road education officer for Fermanagh and Omagh, Trevor Kirke, has said the issue wasn’t confined to older generations.
“Anecdotally, I’ve been in this job 20 years now and I feel like I’m seeing older people and more younger drivers taking that risk now,” he said, adding he did not currently have official figures for the area. “There seems to be an aspect of bravado about it, though it really is a small minority.”
Constable Kirke said while numbers had fallen on previous highs in the past, the problem of drink driving was “definitely persistent.”
He added when proposed legislation was enacted in the coming months, which will significantly reduce drink driving limits particularly for newly qualified and professional drivers, many more people could find themselves in court.
“When the new planned legislation comes in it’s really going to have a significant impact, and it’s really going to catch people out in the morning after scenario,” he said.
He wouldn’t comment on specific court cases, stating each case has its own background and was taken by judges on its own merits, and stated it was up to the police to take people to court, and from there it was for the courts to decide.
“Our job is to try and educate people, and to detect people who break the law,” he said.
Councillor Raymond Farrell suggested hard-hitting drink driving campaigns of days gone by could be reintroduced, and even pointed to extreme campaigns in countries like Turkey where fatalities were shown to deter young people from getting behind the wheel drunk.
“There would be an argument for this, it’s certainly open for debate,” he said. “It’s an issue that needs to be kept in the public eye as much as possible.”
Cllr Farrell praised bar staff and others who reported suspected drink drivers, and encouraged others to do the same.
“It’s a difficult position to find yourself in but if you see an inebriated person attempting to drive, it’s only right to report that incident. What if they hit a child?”