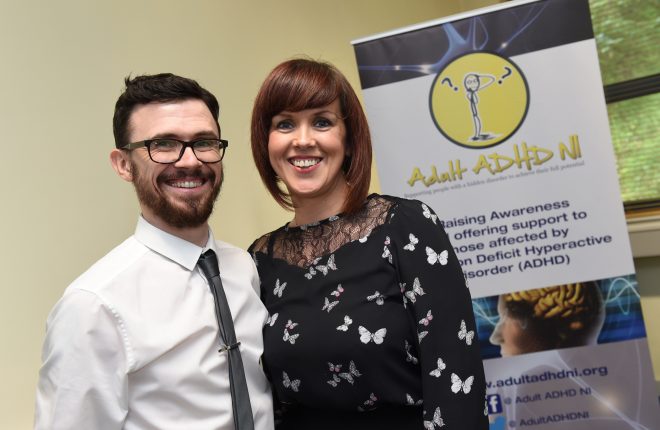 A FERMANAGH  couple who inadvertently started off a province-wide support group for adults with ADHD have called for more services to be provided for those suffering with the condition.
Niall Greene and Emma Weaver run Adult ADHD NI from their base at Lackaboy in Enniskillen, providing a support network for grown-ups who have attention deficit hyperactivity disorder (ADHD), a condition most incorrectly assume only affects children and which can affect all aspects of a sufferer’s life.
The pair had only ever meant to start one small support group in Fermanagh, which still meets once a month at the Aisling Centre, but due to the overwhelming demand for the service they quickly found themselves running a wide support network across the North and beyond.
“We started it in November 2012 because we couldn’t find any supports ourselves, it was started out of need,” explained Emma, who is a mental health professional. “We were overwhelmed with the response. We had this small room and it kept filling up.”
Emma, who explained four percent of the adult population suffer from ADHD, said people came from all over the North and from as far away as Galway, as there were no similar services available. They then began a second support group for Dungannon and Omagh, and now have several groups across the North in areas such as Derry and Belfast.
“By the time they come to us a lot of people have had very bad experiences with it,” she continued. “It’s something that affects every aspect of people’s lives. It has a ripple effect throughout someone’s life.”
Emma explained those who suffered from it often found themselves getting into difficulties in employment and personal relationships, due to the nature of the condition, which can cause problems concentrating, for example. Other conditions often accompany ADHD also, such as anxiety disorders and even depression.
Emma said one of the main issues with adult ADHD was in getting a diagnosis, despite research showing it is “one of the most treatable mental health conditions.” She said while the Western Trust had been making “extremely positive” moves in training staff to recognise the condition in adults, she said more had to be done in the health service in general and said they had been lobbying Stormont to do more for sufferers.
Emma added Fermanagh and Omagh District Council had been very supportive, and were going to light up Enniskillen Castle yellow in October to mark ADHD awareness month.
Finally, she said those who attend the support groups do not have to have been officially diagnosed with ADHD, given how hard it is to get a proper diagnosis, and anyone who believes they are suffering from the condition should attend.
The Enniskillen group meets on the first Thursday of each month from 7pm to 8.30pm. For more information call 66322077 or email niaadhd@gmail.com.