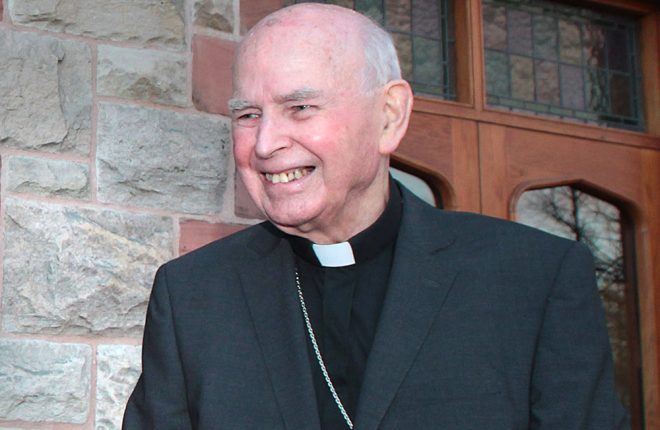 Up to one thousand mourners bid an emotional farewell to Belleek-born Bishop Edward Daly at his Funeral Mass in St Eugene’s Cathedral in Derry this afternoon.

At the start of today’s Funeral Mass, a message of condolence was read from the Holy Father Pope Francis, recalling Bishop Daly’s “generous and dedicated episcopal ministry in the service of peace and justice”.

Archbishop Martin gave thanks for Bishop Daly’s tireless service, saying that for almost 60 years, he was a good and faithful servant of the Lord.

“There was never any doubt that Edward Daly was a great priest, a caring and compassionate pastor, a man of prayer and peace, a courageous and fearless leader, a special person. As I stand here at the very spot in this Cathedral where Bishop Daly ordained me to the priesthood 29 years ago, I’m thinking: if only I could be even half the priest and bishop that he was, I know I’d be serving God well. Well done and thank you Bishop Daly, good and faithful servant. Go now and receive in God’s mercy the reward that He has prepared for you,” he said.

In his homily, Bishop McKeown said Bishop Daly’s ministry was marked by total dedication to the people he served, wherever he was called to minister.

“That dedication was visible in outstanding courage. He showed physical courage on Bloody Sunday and his moral courage was evident in his passionate struggle against violence and injustice from all quarters. It takes enormous courage to be a peacemaker and he was an apostle of mercy, whether as a curate, as a bishop or as chaplain in the Foyle Hospice. For that courageous service of God and of his people, we give thanks today. We have all been blessed by it,” he said.

The funeral heard that around 25,000 people had paid their respects to the much admired cleric as his body lay in repose at the cathedral this week. A chalice presented to the newly ordained Fr Edward Daly by the people of his native Belleek in March 1957  was on the altar today for the Liturgy of the Eucharist and was described by Bishop McKeown as “a sign of his own 59 years of dedication to the regular celebration of the Eucharist”.

Mourners broke into applause as his remains were carried from the cathedral for burial afterwards within the grounds.