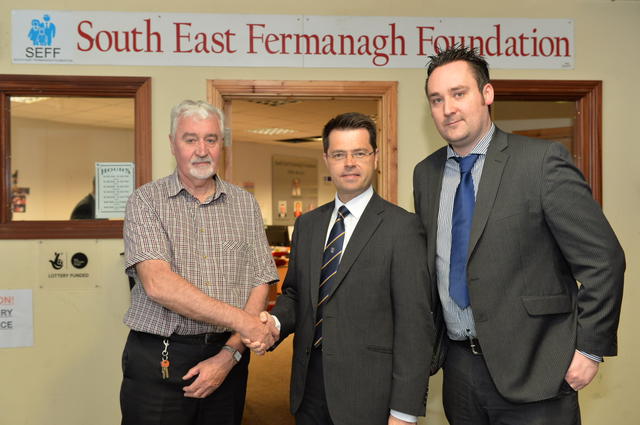 The Secretary of State, James Brokenshire MP, visited Fermanagh this week to meet with victims of the Troubles in the border area.
Mr Brokenshire met with representatives from the business and farming community while in Fermanagh on Tuesday, and visited the Lisnaskea-based victims group SEFF (South East Fermanagh Foundation) where he met with a small group of local victims. SEFF director of services Kenny Donaldson said the group was “heartened” at his approach adding that it hoped a very different relationship might develop where the Secretary State would “do with” victims as opposed to “doing to” victims.
He added issues discussed at the meeting included the proposed new Historical Investigations Unit, Brexit and implications upon Peace IV funding, the proposed Pension for the seriously injured and eligibility issues, restoring the Army Widows Pension for those who have remarried, legal aid challenges for innocent victims and survivors of terrorism, SEFF’s plans around providing a service for GB-based victims/survivors, and the southern State’s failures around border security and extradition and the need for a formal acknowledgement.
“The SEFF delegation comprised of those who have been directly bereaved by terrorism and management. The group pressed the Secretary of State on a number of issues which are of concern to them and, moreover, borderland victims and survivors,” said Mr Donaldson.
“We had a positive yet robust exchange with the Secretary of State. The message conveyed by SEFF families was that victims and survivors in our borderlands expect their Secretary of State to cease being ‘neutral’ on matters which concern them including; holding to account the RoI State and its’ security forces where they have questions to answer for their past actions and/or their inaction”.
“The Secretary of State acknowledged that there has been an imbalance in how ‘legacy’ issues have been examined to date, he agreed with us that innocent victims and survivors of terrorism must be facilitated in their quest to obtain justice, truth and accountability around events which have had such a devastating impact upon their lives”.
“We were also heartened at the Secretary of State’s commitment to face down those who would seek to re-write the history of ‘The Troubles’ and the terrorism perpetrated which accounts for in excess of 90 pre-cent of ‘Troubles related’ deaths.”
He concluded: “SEFF hopes to build a positive relationship with the new Secretary of State in the times that lie ahead, jointly delivering for the innocent victims and survivors of terrorism and other Troubles-related criminal violence.”
Earlier on Tuesday, Mr Brokenshire visited the memorial garden in Omagh, dedicated to victims of teh 1998 bomb, and visited an outdoor adventure centre in Moneymore.