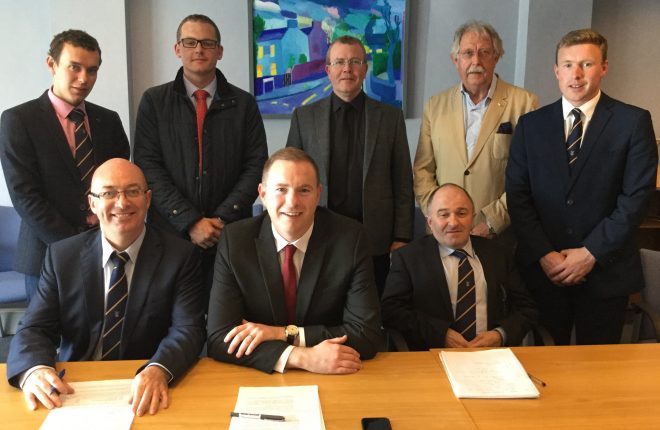 In the aftermath of last winter’s flooding that devastated parts of the county, five flood mitigation schemes are to be progressed over the coming months in Fermanagh.
The news was confirmed by the Infrastructure Minister Chris Hazzard at a meeting with cross-party representatives from Fermanagh and Omagh District Council in Belfast last Thursday where they discussed a range of flood mitigation and strategic road schemes in the area.
The Minister told councillors that additional funding from the Executive would allow flood mitigation works to be carried out at a number of locations. Mr Hazzard said priority is being given to those locations where the greatest benefit will be achieved – the Newbridge Road at the Share Centre; Wattlebridge Road at Derrykerrib; Inishmore Road; Boho Road and Wellington Road spur at Enniskillen Bus Depot.
“The extent of the work at each location will be dictated by factors such as ground condition and affordability and it is considered that the solutions being implemented provide value for money and allow works to be carried out at a number of key locations,” he said.
The five flood mitigation schemes, which will be progressed, include three crossings of Upper Lough Erne, which were closed following the severe rainfall last autumn causing severe disruption to traffic, which had to use lengthy diversion routes.
At the meeting, Minister Hazzard also confirmed that consultants have been appointed to take the long-awaited Enniskillen southern bypass project to the next stage. As reported in this newspaper last month, the draft orders and environmental statements are expected to be ready early next year, with the project proceeding to the consultation process by the summer.
The £35 million bypass project, which is aimed at reducing town traffic by up to 40 per-cent, will require the construction of two kilometres of road from the Dublin Road, near the Killyhevlin Hotel, to the Derrylin Road, just south of the Belcoo/Derrylin Road junction, and a number of bridges will also be required.
During the meeting, councillors were told that further improvements to the A32 are subject to funding becoming available while the Minister also committed to further engage with the Council regarding improvements to the A4 corridor in the near future. Mr Hazzard confirmed that he intends to visit County Fermanagh in the coming weeks.
Speaking after meeting the Minister, Ulster Unionist Cllr Alex Baird told the Herald: “The Minister said that he had an interest in the area West of the Bann and intended visiting the area soon. The questions which we posed were answered in an open way and as a result of the meeting I believe that a rapport was established with the Minister. Time will tell.”