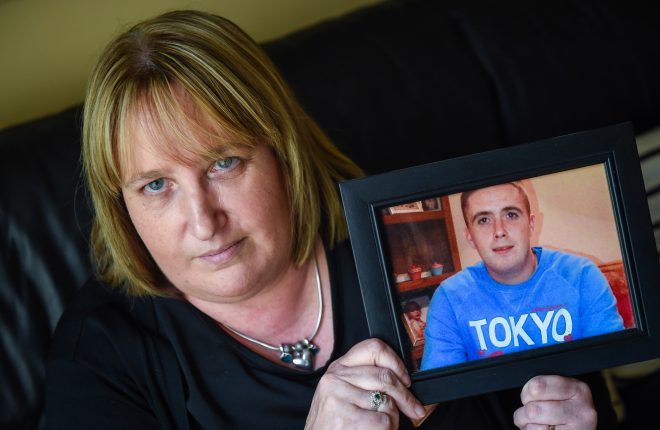 The heartbroken family of a young Fermanagh man, who took his own life over two years ago, have made an emotional appeal urging others in trouble to speak out or seek help.
Ian and Mary Monaghan from Killynure in Enniskillen, who lost their beloved son Paul in 2014, took part in a short film to highlight the devastation felt by the families of those left behind to pick up the pieces.
A past pupil of St Michael’s Primary School, Holy Trinity Primary School, St Joseph’s College, and the Integrated College, Paul was found dead at parkland near the Racecourse Lough in the Corban Avenue area by a man walking his dog on Saturday, March 22nd 2014. At the time of his death, Paul was living in the Cornagrade area with his partner, Bernadette, and her children.
Over the past 18 months, Mary and Ian along with their daughter Melissa, have constantly made attempts to get back to some kind of ‘normal’ life. Despite her best efforts, Mary says that time and again the waves of grief crush her.
“It certainly doesn’t get any better day-by-day and if anything it gets slightly worse because reality is hitting home. I keep myself busy so that I don’t have to deal with the fact that this is real. I’m still very much being carried along and struggle most days just to function.”
Having endured birthdays and Christmases without Paul, Mary says this year is particularly poignant as she turned 50 while he would have been 25 in June.
“Any anniversary dates are horrible but then most days are horrible anyway,” she added.
The family have now taken the brave step of publicly describing the moment they learned of Paul’s sudden and unexpected death and the impact it has had on their family in a ten minute film, No Ordinary Goodbye, which has been released on YouTube.
“Burying your child is one of the most horrendous things that any parent will ever do. I personally feel that the day I buried Paul, I buried half of myself. Life just doesn’t feel the same anymore and it’s like a big part of me is gone. It has changed me as a person completely and I don’t feel that I’ll ever be the same bright, bubbly person again,” she said.

Mary told the Herald this week that she hopes the film, which was jointly produced by Write Path NI and Empty Horoscope Media, will help ‘even one person’ experiencing difficulties with mental health. She also offered her own plea to those suffering depression or difficulties in their lives.
“I hope that people will find it helpful and that it will make them think. If anyone is feeling that way, I would say just don’t do it because it’s a permanent solution to a temporary problem. Just take a look at that film and see what we as a family who have been left behind deal with every day. It speaks for itself of the struggle to get on with everyday life and do normal things.”
She added: “As we said in the film, we firmly believe that if Paul saw the trail of destruction that he left behind he would never have chosen that path. I can’t save him but if we can save anybody or the film stops one person from making that choice then it has to be worth it.
“Ian, Melissa and I don’t want any other family to go through what we have went through. Sadly there have been so many similar cases since Paul died, particularly around Fermanagh, which is frightening.”
If you or someone you know is in distress or despair, call Lifeline on 0808 808 8000. This is a confidential service, where trained counsellors will listen and help immediately on the phone and follow up with other support if necessary. The helpline is available 24 hours a day, seven days a week. You can also access the Lifeline website at www.lifelinehelpline.info