Advertisement
HomeHeadlineEcovillage pioneers on the lookout for Fermanagh site
Advertisement 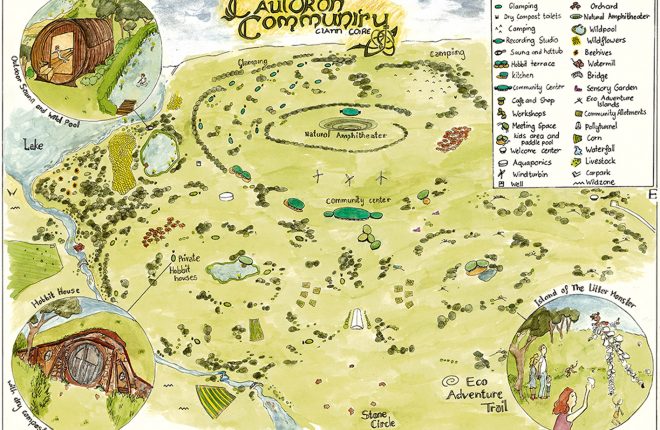 THE group behind a drive to bring the first ever ecovillage to the North are currently scouting Fermanagh for a location for the ambitious project, which could bring in millions in tourist revenue and help rejuvenate the rural community where its located.
John Paul Patton, managing director of Cauldron Community who are behind the Enriched Earth Ecovillage project said while they were looking across the province of Ulster, even considering locations in the South, the aim was to create the first site of its kind in the North and ideally they would like a border location given the project’s inclusive and cross-community ethos.
With the stunning wild scenery and rich environment in the county, he said Fermanagh would be the ideal location for the innovative project.
“We first came up with the idea two years ago, and were officially formalised as a Community Interest Company in March this year,” said Mr Patton, who was formerly an English and Media teacher at the eco-award winning Lagan College and said environmental education is very important to him. “It’s very pioneering.”
“We don’t have a site yet, but we have pledges for around £200,000 and have 25 aspiring residents. We would like to get £250,000 in private investment,” he added, explaining the project would like cost much more but they hoped to get match funding from various sources.
Mr Patton said their plans for the site included scores of hobbit-style houses, for both long and short-term rental to families, a wild pool and outdoor spa, forests, wild-flower meadows, wind turbines, camping and glamping facilities, and much more.
“It all depends on the planners and the available land,” he said, adding the project was not profit driven and they didn’t want it to be “a middle class retreat.”
He said all of the above were the reasons they were seeking a site in west Fermanagh. The group have also been looking at sites elsewhere, such as in the Strabane and Derry area, but are hoping to find a sympathetic landowner as well as local support to help keep their Fermanagh dream alive.
“It’s so pioneering, we need 100 per-cent support from the council, local planners and  the community,” he said, explaining they had a strong team behind the project including input from planning experts.
While they have yet to meet with Fermanagh and Omagh District Council, they have already spoke with a supportive Fermanagh representative from Tourism NI.
“We want to get Fermanagh and Omagh District Council on board, and will seek a meeting when the time is right,” he said, explaining they were currently working on their business plan which they wanted to polish before meeting the Council.
Mr Patton said, with regard land, they had been keeping an eye on the property market in Fermanagh. He said they would likely need at least 65 acres, would ideally want 111 acres, but
For more information visit www.cauldroncommunity.com

Can’t wait… Foodie lovers in for a town centre treat

Get Active with the Herald Continues

Clocking up the miles for Macmillan Cancer support

Connor and Emily doing their bit for charity