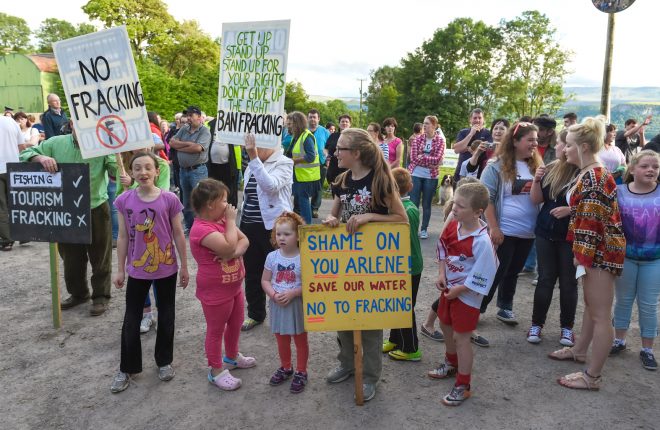 Protesters at the proposed fracking site near Belcoo RMG41

LOCAL spokesmen have reacted strongly against a suggestion by the UK prime minister, Theresa May that householders in areas where there are known gas deposits be paid £10,000 in the event of extraction of oil and gas by ‘fracking’ given the go-ahead.
One such area is west Fermanagh.
Tom White, the chairman of Belcoo Frack Free, said he understood the money would come from one per cent of the revenue from the natural gas that is produced.
He went on: “We’re in a situation with North Sea Oil and Gas where the tax receipts are going to be negative by a billion in the upcoming years, so there is no money. There won’t be any money.”
He described Mrs May’s idea as ‘unworkable’.
“If I am renting a house are they going to give it to the landlord or are they going to give it to the person living there. And. if I am on benefits, how is the £10,000 going to affect my benefits?”
The local SDLP Assembly member, Richard McPhillips described the £10,000 compensation as ‘a desperate attempt to reverse public opinion’.
“This proposal is clear evidence that the British government are getting desperate to reverse public opinion on fracking. Local residents will not put a price on their health or that of their children or the land that they leave behind for future generations.”
He suggested Mrs May’s money offer was, ‘pre-emptive compensation for unforeseen problems that might arise’.
He concluded: “ Now that future decisions will be made by a DUP minister, we will continue to champion the campaign to keep Fermanagh and the North fracking free.”
Meanwhile, the Green Party has described the proposed payment as a ‘bribe’.
Tanya Jones, its representative for Fermanagh South Tyrone, who is an anti-fracking campaigner said the UK should be utilising its natural resources responsibly.
“This is why we advocate the development of safe, clean and renewable alternatives such as air, solar and tidal power. Effectively bribing local people to accept fracking is not an effective use of resources.
“Fracking threatens our health, our economy and our landscape. It is entirely unacceptable.”
Ms Jones urged people to ‘follow the evidence’ and make informed decisions as to what should be happening in their local environment.
One pro-fracking proponent, the former DUP environment minister, Sammy Wilson, described the Green Party  as ‘the green Luddites’ and accused it of wanting to bring back the horse and cart.