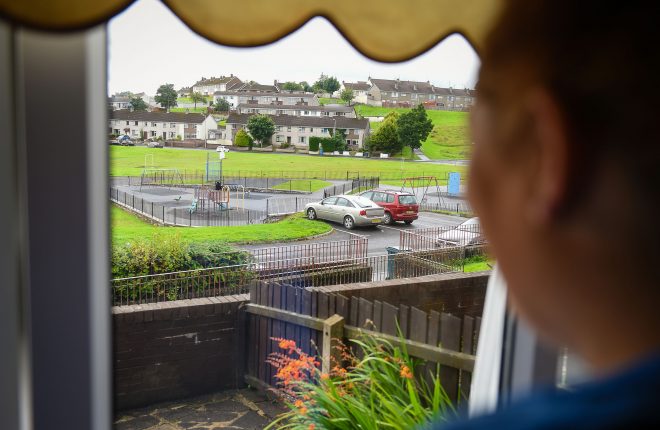 Children in the Cornagrade area of Enniskillen have been left shaken after a number of suspicious incidents occurred as they played in the area.
The first of the incidents began in the Derrin Park area at around nine o clock on Sunday evening when a young boy heard his name being called by a man he described as quite big build and having “black curly hair”. The man proceeded to wave at the child before leaving the area.
Around one hour later, the man returned with two other men in a car described as a metallic silver Mercedes or a Vectra.
“The black curly haired man was in the back of the car while the driver of the vehicle was wearing a hat that was covering majority of his face and he was smiling at us while we played. The men stayed in the car watching us for about ten minutes, but they did not make a move to get out of the car,” described the children involved.
On Monday afternoon at around three o’clock, the boys returned to the play area and the suspicious man returned in a different car, this time a silver jeep. The man went to get out of the car but the two boys ran off and were forced to climb over a fence to get out of the area and ran into a neighbours house.
The area in which the suspicious activity occurred is in close proximity to Holy Trinity Primary School in Cornagrade and is a hub for young children to be out playing and enjoying their summer holidays.
One concerned mother whose child was involved in the incident said, “This has really scared them. In the bright evenings the children all go outside to play football at the pitches. There are houses all around and all the children be outside playing and the families all look out for each other. There are so many kids around here in the summer time and there is great facilities over at Derrin Park but they will not be able to use them now because of this.”
The two boys were left visibly terrified after the incident and are struggling to feel safe to go outside on their own since this happened.
“I think I will have to be with some of my friends from now on, I would not want to go out on my own. We only have 29 days left of summer and we would like to enjoy them and not feel scared to go out and play.” said one of the boys.
The incident has been reported to the PSNI and on Monday evening residents reported that the police were doing door to door checks in the area to find out further information on the suspicious activity.