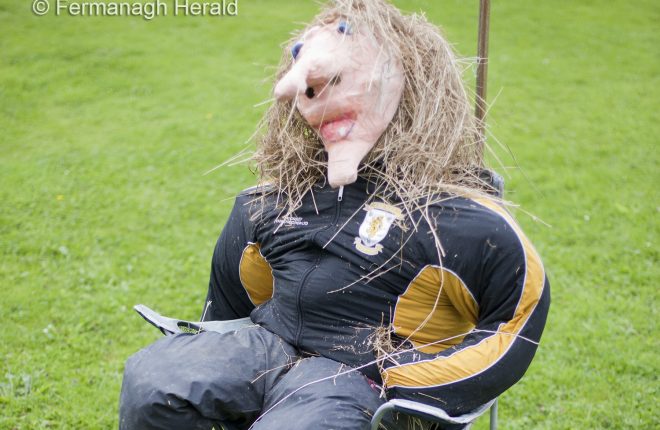 Coa Bob Strawpants,’ ‘Scream,’ ‘Mrs Brown’ and ‘Mc Carney’ all made an appearance over the past week in Coa. One of the main highlights of the Coa festival, was the appearance of 40 scarecrows sprinkled around the Coa area. The community all came together and really out done themselves when it came to their black and yellow themed scarecrows.
Unfortunately while the festival was winding down, four of the scarecrows were burned down in Coa. The event finished on Sunday evening after the judging of the scarecrow competition and after this four of the festival’s scarecrows were completely burnt.
“We don’t know who burned them, just some ones running about on Sunday night. We have had to ask everyone to take their scarecrows down for safety reasons. They burnt four of the scarecrows but the festival was all over when they did it so we won’t let it spoil the weekend on us. Some people are even joking about it saying that it saves them having to take them down.” said festival organiser Maurice Cassidy.
Despite the burning of the scarecrow, Coa O’Dwyers first ever summer festival was a huge success. On Saturday, participants lined up for a sponsored cycle and walk, with money being raised for the Ellie Nicholl Research fund. The cyclists travelled all over the county and covered all the clubs. The festival goers then relaxed at a barbecue with music and games before heading to Mr and Mrs in the Coa Community Centre. Luke Burns and the Rare Ould Chimes entertained the big crowd to late on Saturday night.
On Sunday, Coa pipe band joined in on the fun at the big sports day. Tug a war, Sheaf toss and mum vs kids match was also a huge success with everyone enjoying the entertainment. To finish the festival, Coa battled it out in the big festival table quiz followed by the scarecrow competition results. The winners of the competition were Thomas and Eunan McGirr, and the runners up were The Donnelly’s.
“The festival itself was brilliant, everything went really well. We could not have asked for any better. The weather was good too. We had a big crowd at the Mr and Mrs on Saturday night, there was almost 300 people. The cycle was good too with half of the proceeds going to the Ellie Nicholl Research Fund.” said organiser Maurice Cassidy.