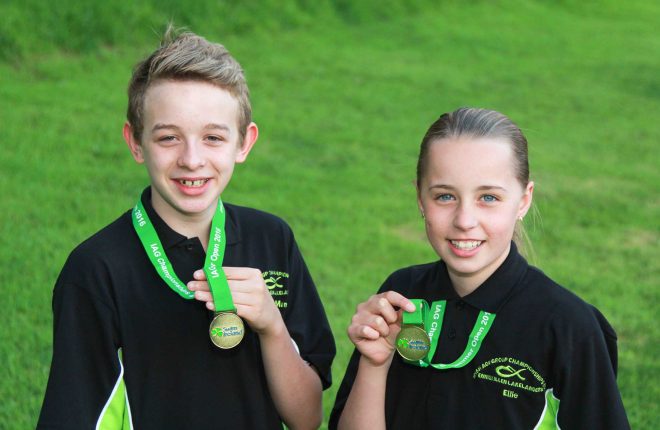 Ellie McCartney has confirmed her status as one of the Enniskillen Lakelanders hottest rising talents with a nail-biting win in Dublin.

Last week she was competing with the best young swimmers in Ireland at the Irish Age Group Division 1 finals at the National Aquatic Centre. Still just 11, she was competing in the 12-year-old and under section.

A superb breaststroker, she went into the finals with some expert advice in her corner in the shape of ex-Olympian Andrew Bree. That bore fruit as she reached the final of the 200m breaststroke with a 3.5 second personal best.

In the final she was drawn in lane five alongside an Ards swimmer, Ellie McKibbin, who had already scooped five gold medals at the championships, one of those the 100m breaststroke captured the evening previous.

As the video shows, the final was as closely fought a sporting contest as you’re ever likely to see, but McCartney emptied the tank in the last five metres to take the gold in a time of 2:53.67. Her Ards rival was just three hundredths of a second behind.

The victory meant that 11-year-old McCartney became the youngest medal winner at the championships.

There was further joy for the Lakelanders when Oisin McManus gave an outstanding performance to take the title in the grueling  1500m freestyle in a stellar time of 18:48.89, a 43.84 second personal best.

Watch McCartney’s thrilling victory in the 200m breaststroke below.