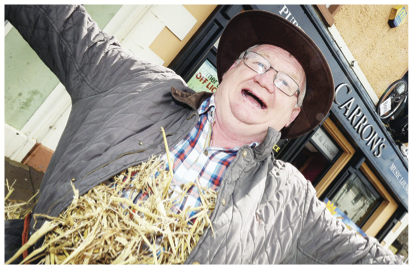 EDERNEY Mid-Summer Carnival ‘Stetsons, Stilettos & Scarecrows’ kicks off this Thursday and runs throughout the weekend from July 7th until the 11th. It will be Scarecrows galore once again as by popular demand the community Scarecrow Competition returns for this year’s carnival after a tremendous entry of over 90 superb exhibits at the Townlands and Scarecrow Festival of 2010.

There’s a packed carnival programme of big band dancing in the marquee featuring top country acts Johnny Brady and Lee Matthews along with local favourites ‘The Originals’ and the sensational Irish Rock/Folk band, ‘The Whistlin’ Donkeys.’

The special community night at the carnival will be on Saturday July 9th at the Cabaret & BBQ Steak night in the Carnival Marquee. Music will be by The Originals Showband and the headline act will be the Ireland’s best loved and busiest comedian, William Caulfield.

The Rose of Ederney contest is back and former Rose Michaela Mc Farland, will be there to pass on her crown to the new Ederney Rose. The winner will go on to represent the village in next year’s heat of the Fermanagh Rose of Tralee competition. Tickets will be on sale locally and on the night for £12 with proceedings commencing at 8pm.

What an Ederney night in prospect on 11th July, especially with Ederney being home to the current All Ireland Jiving Champion, Sarah Louise Montague. New this year will be an international ethnic food and craft event on Saturday at the Glendarragh Valley Inn grounds featuring the best of cuisine and craft displays from members of the local ethnic minorities and cultures.

A host of other sporting, music and entertainment events such as the original Ederney street pig racing, treasure hunt, big bingo, cycling, 5 & 10k walk/run, Saturday night marquee cabaret, football and hurling coaching camps and lots more for all the community to partake in to ensure fun for all the family.

A spokesman said, “No Ederney Carnival would be complete without our beloved Highwayman so once more our unknown caped supremo will be unmasked to lead and over see the proceedings during our Carnival and escort the Rose of Ederney in his usual gallant, swashbuckling manner. Who will it be this year? Roll on the weekend and all will be revealed.”