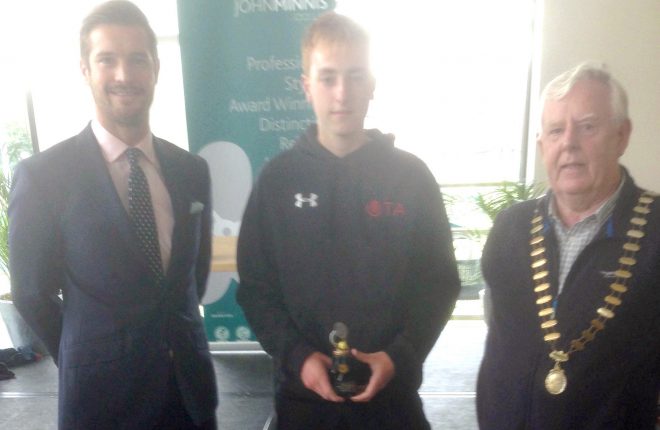 Kyran Maguire, centre, pictured after his under 16 singles victory at the Belfast Hardcourt Championships.

Kyran Maguire had a big weekend as he claimed the under 16 singles title at the Belfast Hardcourt championships at CIYMS.

He had to do it the hard way too, coming through four testing rounds against quality opponents.

The competition second seed started with a first round victory last Thursday over Cameron Beattie, running out a 6/2 6/2 winner. Later in the day his quarter-final pitted him against Bradley Yeats from Bangor and Maguire was able to book a semi-final place with a 6/4 6/1 victory

The semi-final was on Friday morning and saw Maguire taking on Cian McDonald of Belfast Boat Club. A tight contest ending with the Fermanagh man prevailing 6/7 6/2 6/2.

An hour later the final saw the Irvinestown player defeat the number one seed Rory Cunningham of the Harwarden club. It was a hard fought match which swung both ways before Maguire’s mental strength saw him get the better of his Belfast opponent 7/5 3/6 6/4.

The pair had reached their respective singles finals at Ballycastle the week previously on the rubber surface. Indeed it was Rory Cunningham who got the better of Kyran in the under 16 decider at Ballycastle, which made it all the sweeter to achieve victory at the Belfast Hardcourt championships.

Maguire and McKeever are in action again this week at the Belfast Boat Club as they compete in the Ulster Championships.