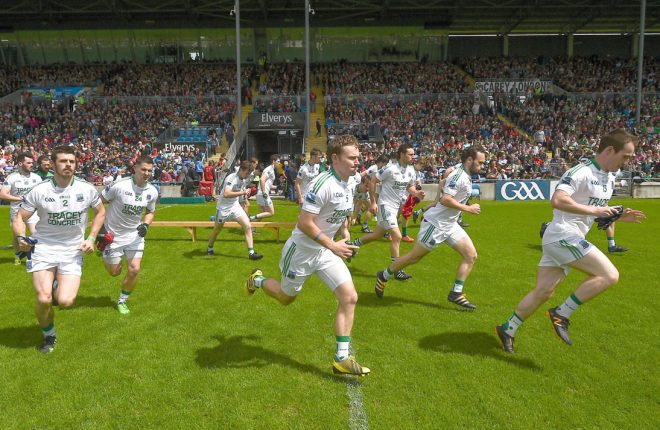 Fermanagh did the county proud again this season.

THE LAST LINE with CHRIS BREEN

On the score board this looked like a comfortable win for Mayo. But let’s be honest here, and this isn’t sour grapes, quite simply Fermanagh were robbed.

We will never know if Fermanagh would have went on to win the game but what we do know is we were denied the opportunity to defend our one point lead that we had accumulated over the previous hour. To take the scalp of a big team like Mayo would have made people stand up and take notice of this Fermanagh side.

When we should be discussing what was a brilliant championship encounter, we are instead left feeling aggrieved by another controversial penalty decision, one that was a crucial turning point in deciding the outcome of this game.

For a team to train so hard and commit their lives to football for the past nine months as these lads have done, to exit the championship in these circumstances is very frustrating.

For a start I’m not going to say that Mayo might not have gone on and won the match as they were the team in the ascendancy in the final 15 minutes, but with seven minutes to go, this game was right in the melting pot.

Fermanagh had Mayo where they wanted them, right on the ropes. However the penalty kick changed the pattern of the game and bailed Mayo out. More often than not, we see these type of decisions go against the smaller teams. I would question if the same scenario presented itself against a so called bigger team would the same outcome have materialised.

It is time that the upper echelons of the GAA started looking at ways of addressing what was witnessed in both McHale Park and the Gaelic Grounds in Limerick at the weekend were another soft penalty was awarded, albeit not a game changer but that’s not the point.

Yes, referees have a difficult job and I wouldn’t envy their role for one minute, but it’s time they were given the support mechanisms to help make these big decisions.

The obvious solution is to trial a video referee. This system works just fine in rugby, why not the GAA? The decision could be confirmed in a matter of seconds. The officials are already connected by microphones at the minute.

In games where we don’t have the privilege of TV monitors for replays, officials should be consulting with one another whereby a decision is not clear cut.

Moving away from the controversy, Fermanagh did what Fermanagh do best. Pete McGrath with ten minutes remaining would have been delighted to be a point or two ahead of Mayo. What I do know is that Fermanagh would have planned to take Mayo down to the final ten minutes and start to ask questions of them.

In the first half defensively we were able to suck the life out of Mayo, and force them down blind alleys at every juncture. The work rate and intensity from Fermanagh to get bodies back and force the turnover was a delight to watch. What impresses me is that Pete McGrath knows his team, his team knows their system and importantly McGrath knows how to frustrate opponents. Mayo wanted to play, but quite simply Fermanagh worked so hard that they didn’t let them.

Marty O’Brien I thought at corner back was immense, nullifying the threat of Cillian O’Connor, putting his body on the line when he needed to and getting forward at every opportunity.

Damien Kelly played the sweeper role superbly and his reading of the game to get back and intercept ball was crucial at times. Beside him Aidan Breen produced as good a 70 minutes as he ever has in a Fermanagh jersey.

I thought we had leaders all over the pitch and in Eoin Donnelly we have arguably one of the best midfielders in the game at present.

The strength though in Mayo’s bench had a massive impact. To bring players of the calibre of Andy Moran and Donal Vaughan in was a massive advantage as they were able to provide some strength and dynamism as they navigated their way back into the match.

Overall, Saturday wasn’t to be. Fermanagh can look back at the game knowing that they gave it their all and left everything out on the pitch. This defeat shouldn’t be seen as the end.

What the county board need to do now is to get Pete McGrath to commit the next few years to Fermanagh football. There is no question that Fermanagh have improved in recent seasons under Pete. McGrath is getting the best from his players, the players appear to be enjoying their football and once again we are becoming a difficult team to beat.

Pete is the man who can guide us back to being a top eight team in Ireland, something we were under Charlie Mulgrew in the mid-noughties.

Looking ahead to Sunday’s match I hope the clash of Donegal and Tyrone is what football should be about. Both teams so far have been up to championship intensity.

I have been impressed with Tyrone’s power going forward and having watched Donegal against both Fermanagh and Monaghan I feel this is an area where Donegal could struggle to contain Tyrone. Donegal though have been resilient and their game management in being able to close out games has impressed me. Couple this with this being their sixth Ulster final in a row means the hunger is still in Donegal and they cannot be under estimated.

However, in an earlier column I tipped Tyrone to win an Ulster title and I am sticking by that.