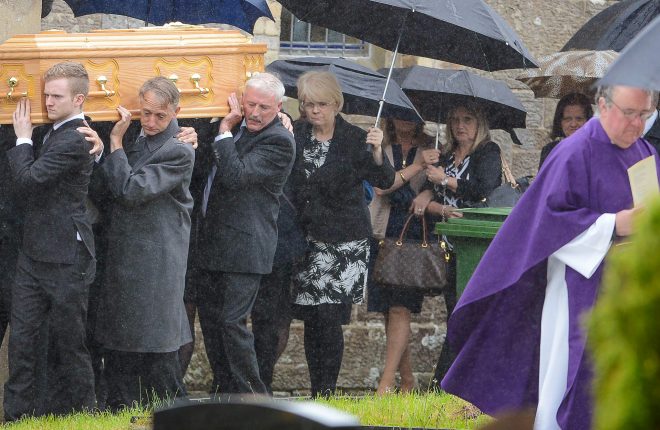 HUNDREDS of mourners have paid their respects at the funeral of Derrygonnelly man Pat McIntyre, who was tragically killed in an accident at his home.
Mr McIntyre, 57, died after being involved in an accident while working at his home on the Knockmore Road in Derrygonnelly last Thursday afternoon.
The late Mr McIntyre came from a family of 12 and had ten sisters and one brother. He was married to Mary and the father of Nevin and Lorena, a pupil at Mount Lourdes Grammar School in Enniskillen.
It is understood that Mr McIntyre was fatally injured while working with a chainsaw and was found by his daughter a number of hours later.
Police and the Ambulance Service attended the scene. The Health and Safety Executive is also investigating the incident.
News of the tragedy has stunned the local community particularly as it comes just nine months after the death of 47-year old Derrygonnelly Harps stalwart Damian McGovern in similar circumstances.
Derrygonnelly-based Independent councillor Bernice Swift, who has known the McIntyre family circle for many years, said it was another “numbing tragedy” for the area.
She told the Herald: “I knew Pat to be a quiet, honest, kind and hardworking family man who took a great interest in his children’s education. Pat had a quick wit and he was a great conversationalist, who always had an interesting take on current affairs.”
“He will be remembered by many for his skill at handicrafts. He was a man who took painstaking care and affection when making things. The Cashel area and neighbouring parishes are sombre places as we are plunged into the shocking reality of yet another tragic loss of young life. My thoughts are with all of the family members at this sorrowful time.”
Sinn Fein Councillor Anthony Feely has also expressed his deepest sympathies to the McIntyre family following the tragic death of Pat.
The Erne West Councillor said: “The news has sent shockwaves throughout the Derrygonnelly, Garrison and surrounding areas.
“Tragic accidents like this are always extremely difficult and shocking to comprehend. I have no doubt that the entire community will rally round to support the family during this difficult time.”
Condolences were also offered by Michael Skuce, chairman of Derrygonnelly and Community District partnership:
“Everyone is absolutely shocked by news of the untimely death of Pat. He was very well-known in the community and it’s devastating for his wide family circle who are very much in our thoughts and prayers. It’s a terrible tragedy in light of a similar incident involving the late Damien McGovern only last October.”
The removal of the remains of Mr McIntyre from his late home to St. Joseph’s Church in Cashel took place on Monday morning. His funeral Mass was attended by hundreds of mourners and was followed by interment in the adjoining cemetery.