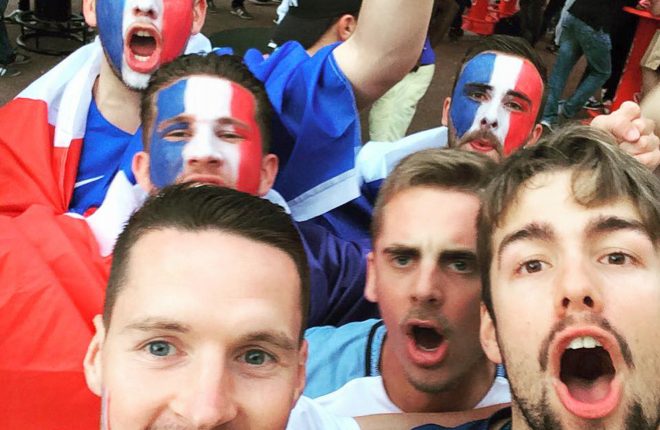 Kyle McCleery, front left, from Fermanagh pictured with French football fans in Nice during the Euros

Fermanagh football fans have expressed their shock following last Thursday night’s Bastille Day  attack in Nice.
Mohamed Lahouaiej Bouhlel (31) was shot dead by police officers behind the wheel of the white lorry that he used to plough into a large crowd watching a fireworks display on the waterfront. The attack at the end of the annual French national holiday left 84 people dead and hundreds more injured.
Just weeks earlier, thousands of Northern Ireland supporters had stayed in Nice for the team’s opening Euro 2016 match against Poland on June 12th.
In the aftermath of the attack, many local fans who had also thronged the Promenade des Anglais were struggling to comprehend the nightmare atrocity.
The Amalgamation of Official Northern Ireland Supporters Clubs said: “Our thoughts are with the people of Nice. Northern Ireland fans had such a great time there only a few weeks ago.”
Team striker and Kesh man Kyle Lafferty tweeted: “Can’t believe what I’m reading about Nice. It’s about time we unite as one and fight this once and for all.”
Enniskillen’s Scott Robinson was among the fans staying near the promenade last month.
“The local people couldn’t have been any more friendly to us and the atmosphere was superb. All the fans were singing up and down the street and the locals didn’t bat an eyelid. There was never a bad word from any of them and they just seemed really pleased to see us. At the time they were all talking about Bastille Day and how much they were looking forward to celebrating it.
“To go from that to what happened on Thursday night, it is incredible to think that four weeks later someone would just drive up into the middle of a crowd of people enjoying themselves. It’s a beautiful part of the world and I can only imagine the devastation and shock in the aftermath of this. We have had our own share of trouble here at home and you wouldn’t wish it on anyone.”  Kyle McCleery from Lisbellaw was also in Nice for the match: “It was such an idyllic and tranquil setting with a great atmosphere among all the fans and locals. Everyone was in really good form and just there to enjoy themselves for a few days. It was such an easy-going place with lovely weather and friendly locals that nobody wanted to leave.
“What happened was so shocking and it’s hard to imagine that only a month ago, we all congregated there to get the buses to the stadium for the match. With big crowds in that exact location it would have been a similar scenario and I can almost relate to the thousands of people gathered in that small area. It’s hard to get your head around as Nice is the last place you would associate with such a violent attck,” he told the Herald.