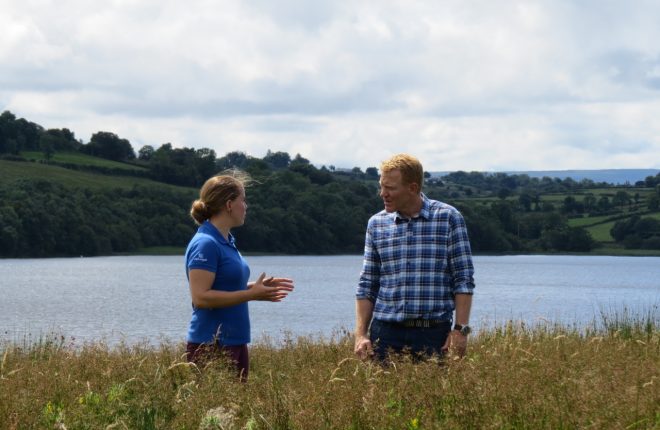 IN a story that falls in the “you couldn’t make it up” category, a group of around 50 Fermanagh folk visited the famous Adam’s Farm in the Cotswolds last week, only to find the man himself was over filming in Fermanagh at the time.
Farmer and TV presenter Adam Henson is well-known for his family run farm in Kineton, Cheltenham, which has become an attraction in its own right and regularly features on BBC’s Countryfile. Last week a group of locals on a Lakeland Tours excursion visited the farm, hoping to meet Mr Henson, however upon arrival discovered he was with the Countryfile crew filming with the RSPB on the Erne.
Ian McCutcheon from Lakeland Tours, who was the driver on the tour, said they “couldn’t believe it” when they arrived and heard where Mr Henson was.
“There were around 50 of us, mostly locals,” he said. “There was one lady who was even related to one of the young lads who was taking Adam out on one of the cots that takes cattle to and from one of the islands on the Erne.
Mr McCutcheon said instead Mr Henson’s daughter Kitty filled in for her father, acting as a wonderful host to the group, which included a lot of Fermanagh farmers and seemed “quite taken aback by it all.”
The Countryfile crew spent two days filming in Fermanagh last week, learning about how the RSPB manage more than 40 islands on the lough and help protect birdlife in the area. Among the places they visited were Rosscor, Boa Island and Hare Island.
The programme will air on BBC1 this Sunday evening, July 31st at 7pm on BBC One.