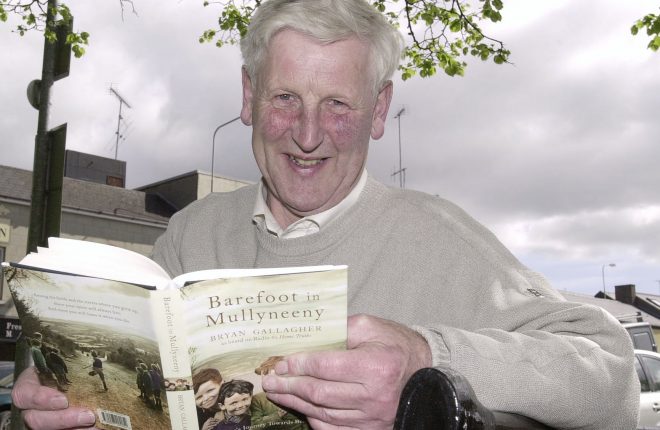 Bryan Gallagher looking over a copy of his book, Barefoot in Mullyneeny.

IT is now three years since the introduction of a much-maligned new postal address system in Fermanagh and, according to some, already we’re losing touch with the heritage of our townlands.

A number of projects and initiatives have been taking place in the county recently aimed at preserving the heritage of our townlands and the local history that goes with them.

For example, a new book, ‘Devenish Townlands – Hectares of History and Heritage’, by Mary Doris and Marie Maguire was launched by the Devenish Heritage Association at St Mary’s College  in Irvinestown last month.

Meanwhile, around 700 local primary school students recently took part in the ‘Our Place’ project on the meaning of their townlands. As part of the Fermanagh and Omagh District Council project, the school children created banners depicting the townlands specific to each school.

Some have viewed these projects as an attempt to preserve this important part of our heritage after it was threatened by the changes to the postal address system, where townlands are no longer necessary and tend to be dropped by people when address their mail.

Former school principal Bryan Gallagher, who along with many others campaigned against the address changes, said the projects showed there “is still some hope” but added local attachment to townlands was “undoubtedly being lost.”

“At the time they pretended they were trying to preserve them with the changes to the address system, but that spelt the death of the townlands,” he said. “Councillors on both sides of the community had defended the townlands and held out until the very last vote was taken. The sad thing is, it then became a political football.”

Mr Gallagher said townlands were “so important to people looking into their ancestry”, and their names described the geography of their areas, and that their loss meant “a whole part of our heritage that’s going to fade away.”

Calling it “cultural vandalism”, he said: “A road is just a line on the map, but townlands are special.”

He added: “One area where they are being preserved is by the Orange lodges, who have their townlands on their banners.”

Cllr Brian McCaffery agreed that the changes to the postal system meant townlands were no longer needed and were effectively being dropped from addresses, with people not willing to add the extra line. He added the effect would be much longer term.

Stating more project like those mentioned above were need to preserve such an important part of our heritage, Cllr McCaffrey said the loss of baronies from postal addresses in the last century were telling.

“If you look at previous changes to addresses over the past 100 years, we’ve lost the baronies,” he said. “Very few people would know what barony they are from now. You would only see them mentioned on legal and historical documents.”

ntioned on legal and historical documents.”