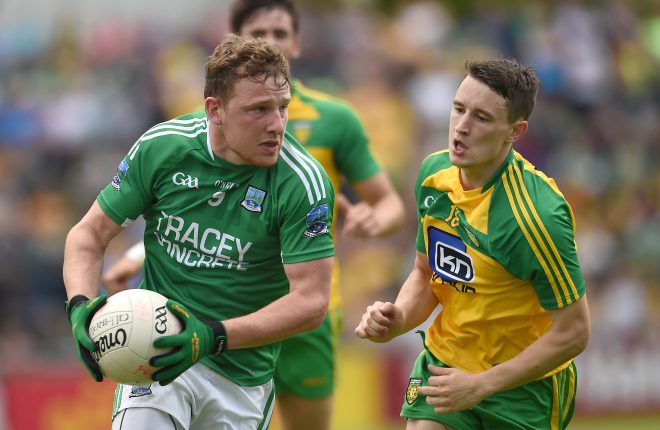 THE LAST LINE with BARRY OWENS

Since Pete McGrath took over Fermanagh, they have steadily been improving.

Pete’s first year in charge was a difficult one, due to his late appointment and some of the more experienced players retiring. Fermanagh kept their place in division 3 but were unable to make any progress in the Ulster and All-Ireland championships.

Pete and his team tried to play a more attacking game, one which was easy on the eye, but unfortunately in today’s game it doesn’t always bring results.

In his second year there was a radical change in Fermanagh’s playing style with more of an emphasis on defending and getting men back to help the defence.

He had met the players in the summer of 2014 to decide on the path they were going to take and started to plan for the following year and this along with knowing the players a lot better contributed to Fermanagh having their best year since 2008.

Promotion to division 2 was achieved and a run to the All-Ireland quarter-final boosted the confidence of the players and supporters within the county. This year the county has had a mixed year with the team consolidating their position in division 2, but unfortunately no progress was made in the Ulster championship or All-Ireland series, but I would still regard it as an reasonable year.

Yes, we only beat Antrim in the preliminary round of the Ulster Championship but the two teams to beat us would be regarded as All-Ireland contenders. Indeed Fermanagh’s only defeats in championship football this past two years have come against All-Ireland champs Dublin, reigning Ulster champions Monaghan, reigning Connacht champions Mayo and Donegal who have contested the last six Ulster finals and are a team ranked in the top five in Ireland so it’s not as if we have been beaten by teams in division three or four.

Pete has instilled a lot of confidence in the team and no matter who they face they feel they can beat them.

Pete has shown he has a willingness to change his footballing philosophies too as he has managed to change Fermanagh from the attacking team we saw in 2014 to the defensive minded team we have seen the past two years which has made us a tough to beat.

There are reports that he is undecided on his future and at 63 years of age who would blame him if he decided to call it a day as the four hour round trip to his home in Rostrevor is bound to be tough on him.

We may not have won any trophies, yet, but progress is being made and hopefully Pete does stay on to get us over the line and finally win an Ulster championship. A bit of continuity in the set-up would go a long way to achieving this.

Thankfully Down have decided to stick with Eamon Burns as their manager as I feel if that management job came up it would be hard for Pete to turn down if it was offered to him.

If Pete does stay, one of his main aims will be to find more scoring forwards to ease the pressure a bit on Tomás Corrigan and Sean Quigley. We have two of the best forwards in the country, but they need help.

Yes our half forwards are working hard in their defensive duties, but we still need to have enough players up in the forward line that can get a couple of points a game.

Maybe it’s a case of just tweaking the game plan a wee bit to leave four players in the attack at all times, but this can be hard to achieve when you’re playing against better teams. Back in the 2000s we had the opposite problem. We had eight or ten players that would get a point or two in any game, but we just didn’t have that marquee forward that could get you eight or nine points and that was probably our downfall at that time.