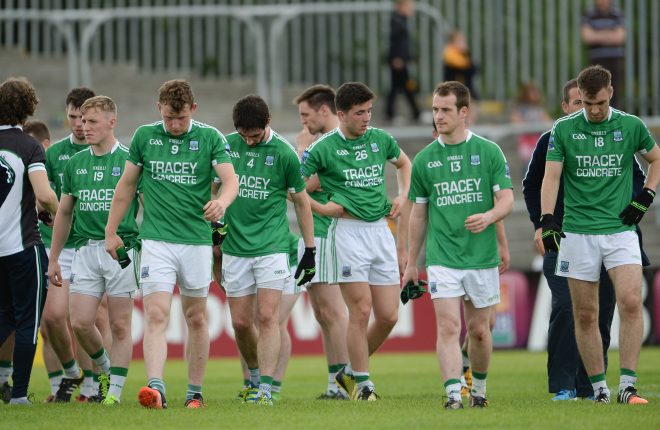 Disappointed Fermanagh players come off after the Championship quarter-final.

The truth of the phrase uttered in many a GAA changing room was borne out again on Sunday; Goals win games.

The two goals from Donegal ensured the hosts would always keep Fermanagh at arm’s lengths. On a warm muggy day Fermanagh had enough on their plate without having to claw back those gifted six points.

In the first half Fermanagh had a huge amount of possession, but had to work extremely hard to break through the Donegal defensive wall.

When Donegal won the ball and broke at pace at least of their two sweepers ran in support, but they would just hold back long enough to come off the shoulder on the edge of the D to break the Fermanagh line.

Much of the time this saw the ball ending up in the hands of Eoin McHugh. His youthful pace was a regular thorn in the side for Fermanagh. In some cases it must be said he was gifted soft frees by Maurice Deegan. It wasn’t an overly aggressive match, but his whistle happy approach spoiled the game as a spectacle and stopped it from flowing.

On the kick outs Chris Snow was effective in getting the ball out quickly, with Fermanagh seeming well drilled in providing an outlet for him to hit ensuring a quick restart.

Donegal took a leaf out Cavan’s book on kick outs, pushing their bigger men right up and Murphy went into midfield, which then meant that when the ball broke the bigger men were able to run onto the breaking ball and carry the ball through the congested middle.

At half time things looked really positive for Fermanagh as they dominated the last ten minutes of the half, cutting Donegal’s lead to two, even with missing the penalty. Fermanagh seemed to have a confidence about them and Donegal were going to have to play a full half a man down.

Then came the killer blow, Donegal’s second goal. A typical goal from an energetic Donegal came from Fermanagh losing possession and the Tir Chonaill men attacking in numbers. This time Frank McGlynn carried the ball effectively, before laying it inside to be slotted home at ease.

Donegal rarely hit the ball directly into their full forward line and that really sums up how much they relied on their running game. This is common practice now as a ball hit in will need to be precise to bypass any sweeper. This is where Donegal excelled and Fermanagh were found wanting.

Eoin McHugh got on a serious amount of ball, and was extremely effective at penetrating the defence. He hugged the sideline running hard until he reached the scoring zone, then turned and hit crossfield balls to the oncoming Donegal attackers who had space and time to shoot or carry the ball through.

It was also a pity that Fermanagh didn’t take on more long range efforts when they found it hard to break Donegal down in the second half. That had worked well in the first half with Sean Quigley, Eoin Donnelly and Barry Mulrone hitting brilliant scores from distance.

In the end as both full forward lines were suffocated was down to who countered attacked most effectively and sadly in the second half Donegal looked like the team with the extra man.

In two weeks time the boys will get the chance to make things right and thankfully avoiding an Ulster team should allow us the opportunity to play with greater freedom.