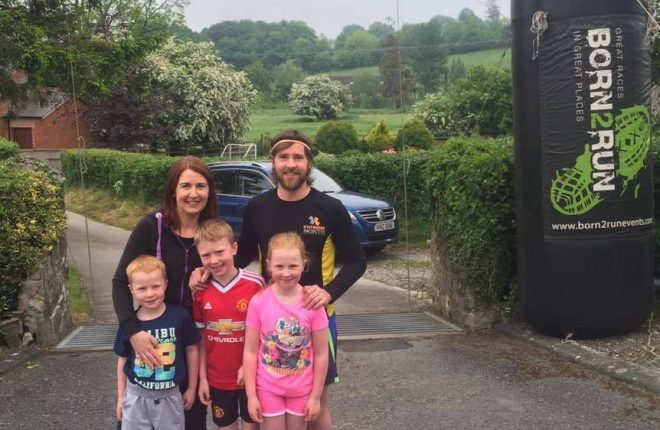 A RUNNER who is currently in the midst of a mammoth 2,400 mile charity run across the north is on his way to Fermanagh, where he will be cheered on by his in-laws on arrival.
Stevey McGeown is running 60 ultra-marathons in just 60 days, with no breaks, and will be arriving in Enniskillen this Monday, June 13. His wife Catherine, nee McCann, who hails from Trillick and has strong family connections in Fermanagh, has urged locals to come out to support her husband when he arrives in the county.
“He set off from our home in Armagh last Wednesday, and it’s definitely a massive challenge,” said Catherine, speaking from her family home in Trillick on Friday. “At the minute, it’s not the running that has been the problem, it’s the heat. He’s already had people coming along and joining in, though, which gives him a boost and he has a support crew with him.”
It’s not the first time Stevey, a relative newcomer to running, has undertaken an epic endurance journey such as this.
“Last year he ran 100 marathons in 100 days, and this year he wanted to do something bigger,” said Catherine, who explained Stevey had only really started running a few short years ago. “A friend of his, whose sister had died, approached him about doing a charity run and he discovered he was a very good runner. He had a latent talent for it. He raised £30,000 last year but felt he could do more this year with more backing.”
That backing has come in the form of children’s charity, the Keith Duffy Foundation. This year, by running almost 40 miles a day for 60 days, Stevey is hoping to raise £300,000, which will also go towards charities Fighting Blindness, Buddy Bench Ireland and the Paddy Wallace Fund for Autism with the money raised.
“We have three children so he wanted to do something for a children’s charity, while his grandfather was blind,” said Catherine, explaining how the charities were close to the family’s heart.
You can track Stevey’s progress, including his estimated time of arrival in Fermanagh, on his website www.steveysepicadventure.com, where you can also donate, or by keeping an eye out for updates on his Facebook page.
Catherine urged as many people as possible to come out and support him when he arrives in the county.
“Come out and give him a cheer,” she said. “It’s a massive challenge and the cheers really give him a wee lift.”
You can also donate £2 to Stevey’s campaign by texting ‘Buddy’ to 50300.