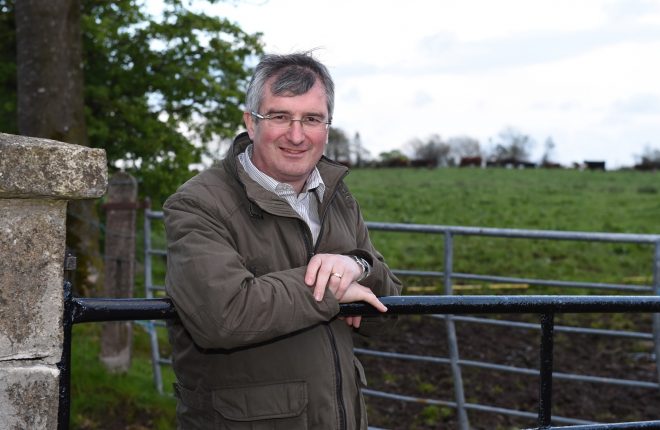 Tom Elliott MP at home on his farm RMG34

LOCAL MP Tom Elliott has finally made up his mind over what way to vote in the EU referendum.
With just over a week until the EU referendum, Fermanagh South Tyrone MP Tom Elliott told the Fermanagh Herald this week that he is “just about in favour of voting to leave Europe”.
The sceptical Ballinamallard man had initially backed the Ulster Unionist’s stance in supporting the UK staying within Europe but he has repeatedly stressed that he was undecided on his stance and yet to be convinced about the merits of leaving.
Mr Elliott acknowledges that it’s a difficult choice for most people.
“My heart basically says to get out while my head would say that I need to reconsider that but on balance, I’m just about in favour of voting to leave Europe. While I have been undecided, my stance hasn’t changed around that decision and broadly that has been my position all along.”
The former UUP leader is known for his previously Eurosceptic views but Mr Elliott says he has been weighing up both sides of the argument in recent weeks.
“Four years ago, there’s no question that I would have been totally for coming out of the EU but now I’m slightly more cautious. That’s due to a number of issues, not least of all because if the UK votes to leave the EU, then it leaves the union of the United Kingdom in a slightly more difficult position if Scotland decides to have another independence referendum.”
Like the DUP, the Ulster Unionists will have a free vote ahead of the in/out referendum on Thursday next, June 23rd.
“To be fair in all of the parties, there is a reasonable mixture of people for and against. Even if the parties say they are fully in favour of coming out or staying in, there are people within the ranks who are more cautious,” added Mr Elliott.
Despite his own farming background and previously expressed fears over the impact of Brexit on small farmers, Mr Elliott says those in the farming community are just as divided.
With indications from both the British and Irish governments that some of form of border control could return in the event of UK departure from the EU, Mr Elliott says there would be no return to the bad old days.
“By and large, if this were to happen there would be border controls to some extent but it would be very different. For example there wouldn’t be the custom huts but instead it would be done electronically.”
He added: “The big problem overall is that there is so much unknown whether you are in or out and no certainty either. A lot of the arguments on both sides have been built on a fear factor that any of us could make. One side is not totally right over the other.”