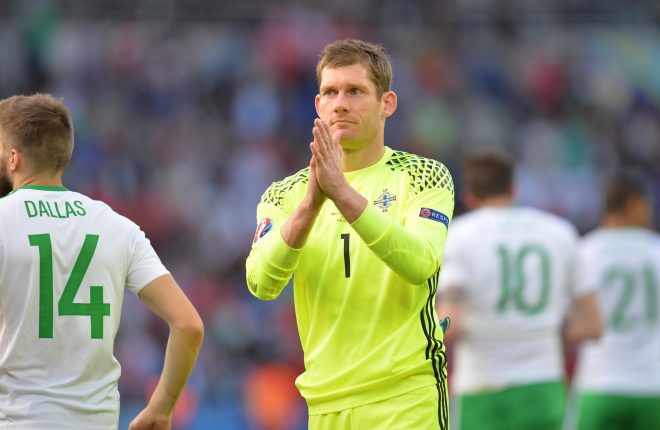 Michael McGovern salutes the fans after Northern Ireland’s exit of the European Championships.

Northern Ireland’s exit at the hands of Wales in the Euro last 16 was painful, a real case of the better team losing. However, despite that disappointment, Michael O’Neill’s men can look back over a tournament where they did themselves proud, and none more so than Enniskillen shot-stopper Michael McGovern.

McGovern was one of the stories of the France 2016, his heroics in keeping Germany to just 1-0 really making people sit up and pay attention.

In making the Northern Ireland number one jersey his own, McGovern usurped fellow Fermanagh man Roy Carroll and 14 of his 15 international caps have come in a space of less than two years. Now aged 31 he is coming into what is often see as the prime of a keeper’s career and with his contract with Hamilton Accies finished he went into the Euro 2016 fully aware that he was unlikely to ever get a better shop window to display his wares.

“I looked at it as a great opportunity to go and play and show everyone what I can do,” said McGovern. “It worked out really well personally and, more importantly, for the team.

“I tried to play my normal game, just doing the sorts of things I would normally be doing for my club. It was nice that everything worked out. But there were so many more eyes on me than there would have been in a club game.

“Michael [O’Neill] always says that I’ve got a good temperament and that’s nice thing to hear. I think that helped me in the games. I just took things in my stride and enjoyed it.”

Now, having shown what he’s capable of against the very best Europe has to offer, one can only imagine that the offers are flooding in. However McGovern reveals he hasn’t yet got as far as sifting through his options for the coming season.

“I left that stuff to my agent when I was at the Euros. Now I’m back I’ll sit down and speak to him because I didn’t want to talk to much about it because I wanted to concentrate on Northern Ireland. So this week or next week we’ll sit down and have chat and see what we have.”

The Enniskillen net-minder is currently back in Scotland spending some quality time with his young family, but he’s looking forward to getting back home and reliving some of the great memories of a never to be forgotten summer.

“I had loads of family over, there were 12 at each game so it was a great occasion. Obviously there were friends over for the games too and it was great to see everyone enjoying it a great time for everybody. Hopefully I’ll get home over the next couple of weeks to see everyone and say thanks. I heard there was a good atmosphere so it would be nice to be able to soak up a bit of that.”