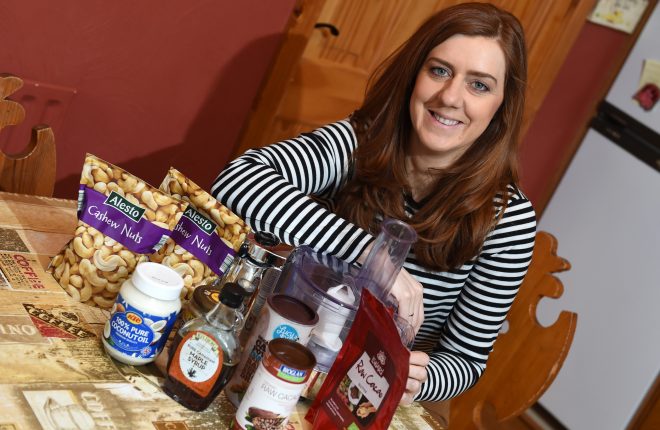 FERMANAGH’S hospitality businesses are being urged to cater for all their customers equally, including those with dangerous and disruptive food allergies.
Last week hundreds gathered in Omagh for a gluten-free food fair, organised for those suffering from life-altering Coeliac disease, an autoimmune disease where the body adversely reacts to gluten found in wheat. Most sufferers find eating out to be a challenge, but it’s not just Coeliacs who find it tough. Those living with other forms of food allergies, ranging from mild to severe, also face daily difficulties.
Local man Niall Donnelly, who was officially diagnosed with Coeliac disease two years ago after many years of suffering, said while the situation had vastly improved, some local restaurants were better than others for accommodating those with dietary issues.
“Two years ago you just didn’t have any options,” he said. “Some places are now getting better,  while other places are not so great. We went to a place in Fermanagh recently where I ordered a bacon butty on what they said was gluten free bread, but it wasn’t. It was clearly made from wheat.
“I think some of these places think it’s a lifestyle choice, while some places have great staff who understand. You will go out of your way to go to these places, and I would avoid the others.
The last thing a place wants is to get a reputation for being flippant about food safety. You don’t know what other corners they’re cutting.”
Maeve Gallagher from Belleek, who is also Coeliac, agreed catering establishments had improved their practices, but said “there’s still not enough awareness out there.”
“There’s certainly more awareness now and a lot more information is available, but some places are better than others,” she said. “There’s still a lot of negative attitudes to it, but we’re getting there.”
Fermanagh woman Heather Fallis, who was diagnosed with having a yeast allergy several years ago, said those suffering from other dietary problems were still struggling to be accommodated.
“A lot of places keep thinking I can eat gluten free foods, and they will come out of the kitchen saying something is yeast free when it’s not,” she explained, again stating some establishments were better than others. “Some don’t have a clue at all. They’re not accommodating and treat me like a nuisance. Others are very helpful and will look up their ingredients.
“What you find is some chefs just dismiss it. It’s not just yeast, my sister-in-law has a serious egg allergy. What chefs don’t realise is if they have a jug of water sitting with knives, for example, and one of the others in the water has been used on egg, there will be traces of it in there.”
Ms Fallis added: “This is the year of food so Northern Ireland should embrace that more with education of people with allergies and intolerances. It’s not just yeast or gluten, there’s a lot out there. There’s milk, lactose, there’s eggs, nuts, some people are even intolerant to spices, and even garlic.”