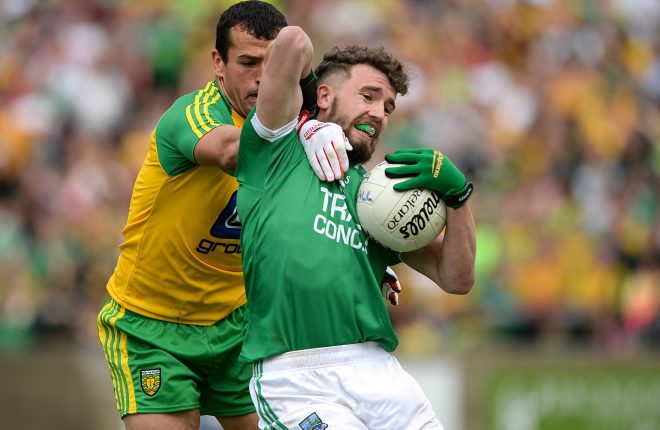 As the half time loomed in MacCumhaill Park it was all looking very promising for the underdogs.

They had weathered the Donegal storm and come back with a purple patch of their own to trail by just a point with a penalty kick to come after a moment of madness from Neil McGee. The kick was stopped by Mark Anthony McGinley, but Fermanagh centre back James McMahon felt the visitors still had the impetus at that point.

“Early doors the first ten 15 minutes we just didn’t get out of the blocks. I don’t know if we had too much respect for Donegal or what, but we let them dictate the play a bit. Then when we started to get a grip around the middle, really press and squeeze up on them, we showed we were well fit to compete at that level. I thought the last 15, 20 minutes of the first half we completely dominated them and probably should have been ahead at half time. Not just with the penalty, we had other missed chances as well.”

Indeed there was evidence of the effectiveness of McMahon’s efforts in the first half as McGinley drilled three kick out over the sideline as viable Donegal outlets failed to present themselves.

“He was a debut keeper, but we thought they were panicking all over the field when we squeezed upon on them and gave them no time on the ball. We made them look very ordinary at times,” said the Roslea defender.

However it was a that old story after the break. The team down to 14 men raised their game, while the team with the spare man struggled to make him count.

“The second half we started well, scored a point and got it back to one straight away. I don’t know whether we thought that when we had the free man we’d have a bit more space and time. We probably didn’t maintain the intensity we had from the end of the first half. Half-time probably came at a bad time for us, we really had the run on them.”

“We came out and the second half was a bit flat and dead which suited them with being the man down. We had plenty of chances, we hit the post, kicked into the block, didn’t work it in. We had three or four goal chances in the second half, but any chance they had they took and I suppose that’s why they’re one of the top five or six teams in the country.”

Now it is back to the qualifier route for Pete McGrath’s men with Wexford offering the opposition on Saturday week.

“Down went down there last year and got turned over [2-16 to 2-11],” said McMahon. “Wexford Park is not an easy place to go to, we had to go down their last year in the league and get a result. We did that time, but it’s back to the drawing board now.

“It’s very hard to take now and will be tomorrow and all this week, but we just have to salvage what we can from this season and keep building towards our ultimate goal which is the Ulster championship which has just eluded us this year.”