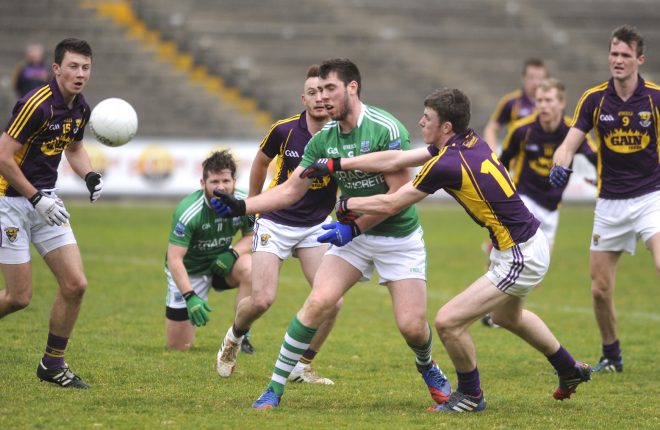 Action from last year’s league meeting between Fermanagh and Wexford.

The team is unchanged from the side which faced Donegal apart from cosmetic positional switches. Fermanagh gave the 2014 All-Ireland finalists a real run for their money in the first half, before fading away against a 14-man Donegal in the second.

Fermanagh mentor Simon Bradley knows Wexford have rebuilt and their battling one point Leinster championship defeat to Kildare is a sign this side will have to be handled with care.

“This is the same county, the same ground that we played at last year, but it’s going to be a different team with different preparation, even though it’s the same management in place,” said Bradley. “They’ve looked at themselves, they’ve looked at what’s happening in Gaelic football and they’ve started to adopt a new style.

“We’re probably slightly further down the line with that, and we also have the advantage of having played division two football, but it’s only an advantage if we bring the right intensity and attitude to the game from the very get go.”

Meanwhile Wexford boss David Power has also named his side for tomorrow. Ciaran Lyng misses out through injury as will Michael Furlong, Tiernan Rossiter and Michael O’Regan.