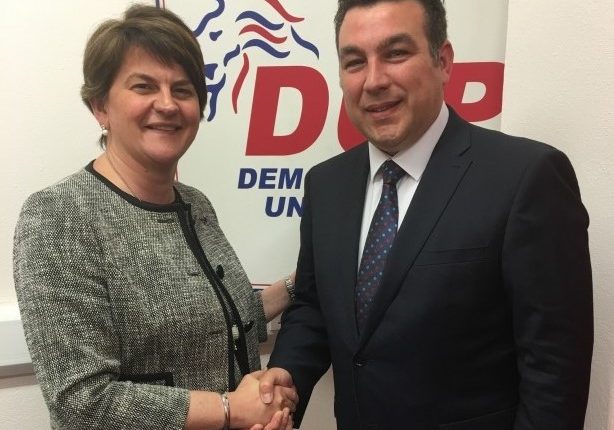 Former Ulster Unionist MLA Alastair Patterson has become the latest member of the party to jump ship to the DUP.

His move to the party comes just weeks after ex UUP Cllr Raymond Farrell joined the DUP on Fermanagh and Omagh District Council.

Mr Patterson lost his Assembly seat to his UUP running mate Rosemary Barton in last month’s Stormont elections, polling 3010 first preference votes. He was co-opted as the UUP MLA for Fermanagh and South Tyrone in January to replace Neil Somerville.

The 43-year-old quantity surveyor from Castlederg said his move to join the DUP was a step he “needed to make”.

“Unionism in Northern Ireland is in an extremely strong position and will get even stronger if more people like myself make the right decision and get behind Arlene and support her as their Leader of Unionism. Under her leadership the DUP can and will dominate Northern Ireland politics for many years to come. Being a Unionist with very traditional core values as a Churchman, an Orangeman, and a Bandsman I feel that the DUP clearly and articulately represent these values.  Consequently, this is the right time for me to join the party.”

Mr Patterson said he felt “let down and disappointed” by recent decisions by the Ulster Unionist Party, both locally and nationally.

“For many weeks I knocked thousands of doors across Fermanagh and South Tyrone telling people that it was the UUP who brought about the two week negotiation for the Programme for Government and that the Ulster Unionist Party would go into these negotiations and work hard for their people, only for Mike Nesbitt to withdraw without even trying to negotiate.”

Mr Patterson said his decision to switch to the DUP was also influenced by the fact that he and his wife Olga are expecting their first child later this year.

“We want to bring our son or daughter up in a prosperous Northern Ireland and I am convinced that this can be achieved under Arlene Foster and the DUP.  I certainly look forward to playing my part in delivering this within the DUP going forward.”

Ms Foster described the DUP’s newest member as someone “deeply committed to strengthening the Union and Northern Ireland” with “a strong track record of public service”.

She added: “He is someone of the utmost integrity and has much to offer Northern Ireland as we move forward.  Like many other unionists who have taken the same step he will find a very warm welcome awaits him in his new home.  We look forward to working with Alastair and he will play an important role within the Democratic Unionist Party.

“Since the Assembly election I have been encouraging unionists across the country to join our party and work with us as we seek to build a better future for Northern Ireland and its people.  I am delighted that our membership is substantially growing in the aftermath of the election and Alastair is further evidence of that,” she added.