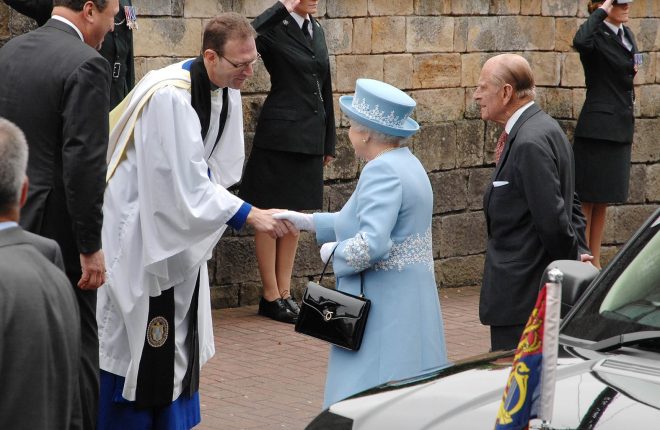 THE Queen’s historic visit to Enniskillen four years ago will be retraced in a special television documentary to be screened this weekend.
As part of celebrations to mark Queen Elizabeth’s 90th birthday, well-known actress Dame Penelope Keith (76) is exploring her palaces and people for her new Channel 4 series series ‘Penelope Keith at Her Majesty’s Service’.
Famed for her roles in classic sitcoms ‘The Good Life’ and ‘To the Manor Born’, Dame Penelope travelled to Enniskillen in May for filming. She retraced the Queen’s steps by visiting some of the most significant places she has been, including St. Macartin’s Cathedral and St. Michael’s Church.
The programme will feature interviews with local church leaders Dean Kenneth Hall and Monsignor Peter O’Reilly. They will reflect on the significance of the visit on June 26th, 2012, during which the Queen made her first visit to a Catholic church in the North and the simple but vital role she played “in uniting two fractured communities in Enniskillen simply by crossing the road”.
Dame Penelope also viewed Hector McDonnell’s painting ‘The Queen’s Visit’, commissioned to commemorate the Queen’s visit, which depicts the moment she crossed the street to visit St. Michael’s after attending a service in St. Macartin’s as part of her two-day Diamond Jubilee tour of the North.
The programme is part of a four part series running this month in which the actress heads to four corners of the UK.
The Northern Ireland episode in which Enniskillen features will be broadcast this Sunday evening, June 19th at 8pm on Channel Four.